A long time ago I read a book which (primarily) examined a bunch of Biblical prophecies which had come true in verifiable history, and attempted to estimate the mathematical probability of this happening by guesswork. The book was Science Speaks, by Peter Stoner, a college professor of mathematics and astronomy, and I have just found it is now available on the internet.

Of course the study found that it was quite implausible that these correct prophecies could have been made by chance, and I remember being very impressed at the time. But the argument for the truth of the Bible from fulfilled prophecy has since fallen on hard times.

Criticisms of the argument include:

Typical arguments against fulfilled prophecy can be found on the Secular Web here and here.

But some people think the argument still has legs. For example John Bloom, a university professor of physics, has written Is Fulfilled Prophecy of Value for Scholarly Apologetics?, in which he argues that fulfilled prophecy can be used to support the supernatural origin of the Bible. He illustrates this with a discussion of Ezekiel’s prophecy regarding the city of Tyre, which he believes has been remarkably fulfilled. Yet sceptics (such as in the Secular Web articles referenced above) use this same example to argue that Ezekiel’s prophecies were mistaken.

Tyre is an ancient Phoenician seaport on the Mediterranean coast just north of Israel, probably established in the third millennium BCE. It was located on an off-shore island and on the adjacent mainland. It was attacked many times in Biblical times, and captured more than once. In 586-573 BCE Babylonian king Nebuchadrezzar attacked Tyre and razed the mainland section to the ground but was unable to capture the island city despite a 13 year siege, because his land-based army had no ships. 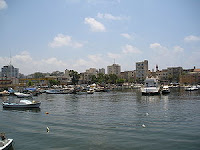 In 332 BCE Alexander the Great captured Tyre, and as part of the assault built a causeway to the island using rubble from the remains of the old mainland city. (With the build-up of marine sediment, the former island is now an isthmus.) In 1291 CE, Muslims conquered the city and left it in ruins. It remained a small fishing village for centuries, then began to be re-established in the 18th century. It is now Lebanon’s fourth largest city at 60,000 people.

The prophet Ezekiel prophesied against Tyre:

I searched on the internet, and found lots of discussion of the Tyre prophecy, and came up with many more references on both sides:

There is no doubt that some matters predicted by Ezekiel came to pass – the attacks on Tyre, the razing of the mainland city, the scraping of its rubble into the sea, and the overall downfall of the once-powerful city. But other matters are arguable, and Ezekiel himself, in his second oracle, seems to accept that the first had not been fulfilled completely. The main factual disagreements between the two interpretations seem to be:

It seems that neither side can win this argument – there are some fulfilled prophecies in Ezekiel’s oracles, and some unfulfilled. But there is a middle view,
represented by this balanced discussion by christian scholar Robert Bratcher. He concludes that some of Ezekiel’s prophecies were wrong but that:

what may we conclude?

These are a special case, and I will look at them in a later post.

« Who believes in God?
is it irrational to believe in divine healing? »