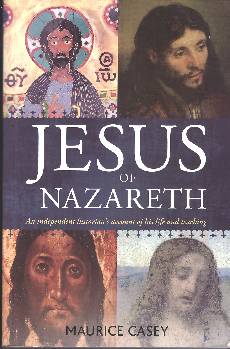 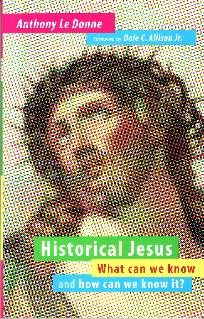 I have recently read two very different books about Jesus and history. One was long, one short; one was by a retired academic, the other by a rising star; one was a detailed analysis of all the things we can objectively know about Jesus’ life, the other a postmodern explanation of why our knowledge is necessarily subjective.

Both were worth reading.

Maurice Casey is an experienced historian of the New Testament, now retired. He is a non-believer, and stresses his “independence” compared to both believers and sceptics. This becomes one of the book’s strengths, but also a weakness.

Casey is an expert in Aramaic, the language Jesus almost certainly spoke. This enables him to reconstruct the Aramaic behind the Greek of the New Testament, and provide some very worthwhile insights into Jesus’ original meaning. This is probably the book’s greatest value.

This leads him to have a high regard for the Gospel of Mark, which he believes was written very early, based on Aramaic sources which Mark translated somewhat roughly. He believes significant parts of Mark are “perfectly accurate”. He also respects Matthew and Luke, who he regards as probably being written by the traditional authors.

As a result of this respect for the synoptic gospels, Casey believes we can be confident of most of the reports of Jesus’ ministry, including:

Casey unfortunately tends to dogmatism on occasions. This results in some unattractive, and sometimes personal, criticisms of both Jesus-sceptics and conservative christians, and a tendency to occasionally make more definite statements than seem warranted from the evidence he presents. For example, Casey regards Jesus as having been an observant Jew and the greatest in a long line of prophets, so he rejects things in the gospels that suggest Jesus may have been more than this:

In the end, he gets the Jesus he assumes at the start, and writes off any “higher” claims.

Anthony Le Donne is a rising New Testament scholar who recently lost his job at a US christian university because of views expressed in this book, though most critics I have read think this was unjustified.

This book, whose subtitle is “What Can We Know and How Can We Know It?”, is really about a “postmodern” approach to historical analysis using the life of Jesus as an example. It is hard to pin down exactly what he means by this, but probably his main point is that no-one actually records history, but their perception and interpretation of it. For, he argues, it is impossible to think without interpreting, and the more we reflect on what we remember, the more we modify those memories.

So, he argues, the history that we know isn’t exactly what happened, it is what has been remembered. Therefore the historian’s task includes asking why these particular events and sayings were remembered, and not others? And he introduces some psychological theory on memory to try to answer this.

He points out, not originally, that the gospels don’t claim to be neutral reporting of the facts, but the choice and interpretation of facts was aimed at helping the reader believe in Jesus. This doesn’t make the gospels less historical, for all documents have their aims and viewpoint. But it does, he argues, mean that we cannot have certainty, though we do have criteria which we can use to test if these are honest memories.

So where does this leave us?

In the end, this book was worth reading for its reminder that the gospel eyewitnesses and writers were human beings who interpreted what they saw or heard. I don’t think it is quite as important or useful a book as most reviewers found it, but I don’t see it as a threat to faith. Historical evidence can only take us so far, and in the end it requires faith as well as evidence to believe in Jesus. Le Donne’s arguments don’t change that.