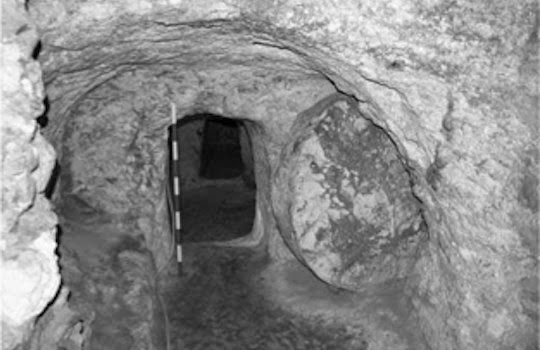 I have written before about archaeological excavations in Nazareth and sceptics who claim Nazareth didn’t exist as a village at the time of Jesus (and hence the gospels must be wrong) – see Did Bethlehem and Nazareth exist in Jesus’ day? and Nazareth re-visited.

I have just come across some new information that was first published more than two years ago in an academic journal, but has now been written up in a more widely-read magazine.

Excavations at the Sisters of Nazareth convent

Dr Ken Dark has a PhD in archaeology from Cambridge University and is Associate Professor at Reading University. He has been doing archaeological work in Galilee for more than a decade, and has published several papers on his findings. In 2012 he published on the results of an excavation under the Sisters of Nazareth convent in the centre of the present city of Nazareth.

He concludes from the remains of a structure, and the dating of some artefacts found there and two tombs, that this is the remains of “an exceptionally well-preserved domestic building, probably a ‘courtyard house'” dating from about the middle of the first century. Unusually, it appears that the house went out of use a little later that century and the tombs were cut into the abandoned house before the end of the first century. (One of the tombs is shown in the photo above.)

Archaeological evidence of first century Nazareth is sparse, because the area has been built over by the present day city. Archaeologists have to work with just a few available sites. But the evidence for the ancient village of Nazareth continues to mount:

The conclusion of a number of archaeologists working in the area is that Nazareth at the time of Jesus was a small village of only a few hundred people, and possibly a little larger a few decades later. Agriculture was carried out nearby, the village’s water supply came from a spring not far outside, and some of the houses were built of stone.

You would think that evidence would be pretty conclusive, but it isn’t that simple.

There are sceptics who argue that Nazareth didn’t exist at the time of Jesus, and this is just another evidence that Jesus was a fictitious character. I’m not aware of there being any archaeologists among them, nor anyone who has worked on digs at Nazareth. The main spokesperson for this group is Rene Salm.

They claim that the archaeologists working in this area are incompetent and/or biased (apparently they are accused of serving the cause of christian apologetics or Jewish tourism). They argue that the evidence points to later dates for all the remains discovered so far. However, in a location where so little of the area can be excavated, it is impossible to prove there was no occupation in the mid first century. The most they can hope to show is that the evidence is ambiguous.

However the archaeologists have rebutted Salm’s claims and arguments, saying that in many cases his alleged facts are demonstrably in error, and the evidence is clear. Salm hints at conspiracy, especially when a paper he prepared was rejected by an academic journal.

The motives for scepticism

When it comes down to choosing who to believe, the qualified archaeologists or the inexperienced amateurs, there really is no choice. It is feasible that an amateur could pick up an occasional mistake by the experts, but when half a dozen professional archaeologists working on several different sites all come to the same conclusion, the cumulative evidence is very strong.

René Salm’s claim that Nazareth did not exist in the days of Jesus is dead wrong and is rejected by every recognized authority – whether archaeologist, textual scholar, or historian; whether Jewish, Christian, agnostic, or other.

It is hard not to conclude that the sceptics are being driven by ideology rather than evidence. Their continued unwillingness to accept the growing evidence reflects badly on their claims to base their views on rationality and evidence.

The arguments about the Sisters of Nazareth site

Dark’s dating is based on the artefacts found at the site and the type of tombs found. Salm contests both.

Salm seems to have taken the in-principle feasibility of a later date as evidence of a later date (which of course is not necessarily so), whereas Dark has based his conclusion on the evidence as he sees it. Again, he is the expert, he has investigated the site, and his fellow scholars apparently accept his expertise and judgment.

Archaeological excavations continue where there is opportunity, and several of the digs listed above have not yet produced final reports. It will be interesting to see what evidence turns up next.

It seems likely that the sceptics will find themselves on a small island of disbelief as the tide of evidence rises around them. It will also be interesting to see how they respond.

« Prayer for healing seems to work
Bart Ehrman on Nazareth »