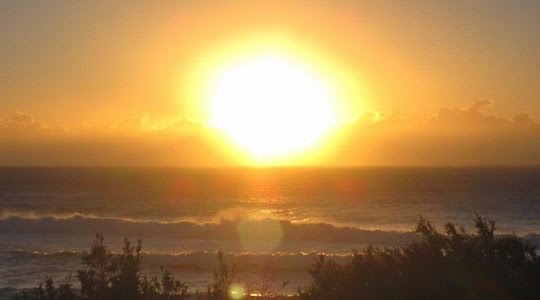 I’ve been away on a short holiday for the last week, at a beautiful spot on the NSW coast. Our holiday unit is right on the beachfront, with views over the Pacific Ocean.

We sleep just inside large glass doors, so we hear the sounds of the surf during the night, and wake as the sun begins to shine over the eastern horizon and small wrens begin to hop across the grass. Watching the sunrise one day this week gave me a few ideas.

From deep red and royal blue to blazing yellow

About 5:30 am, the first hints of the coming sunrise appear. The black sky starts to turn a deep blue, with a faint red glow above the dark clouds that line the horizon. 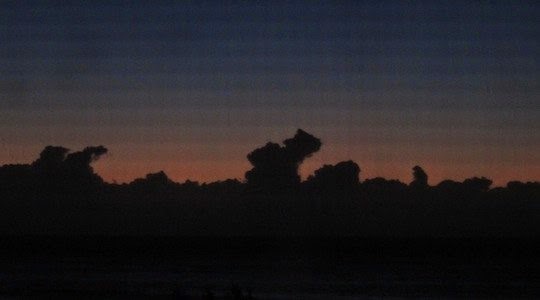 The sky begins to lighten and the waves are visible for the first time. The sun is still hidden, first below the horizon and then behind the thick cloud, but we see a hint of it in the red tinge to the top of the clouds. 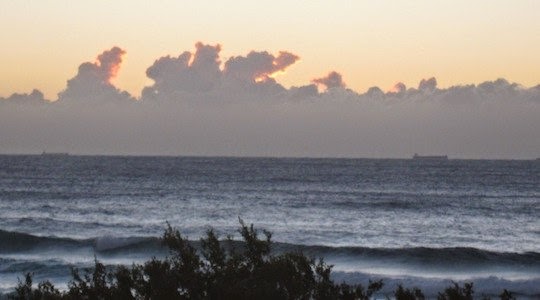 Then the clouds start to glow bright orange-yellow and the sky in the east begins to glow orange. 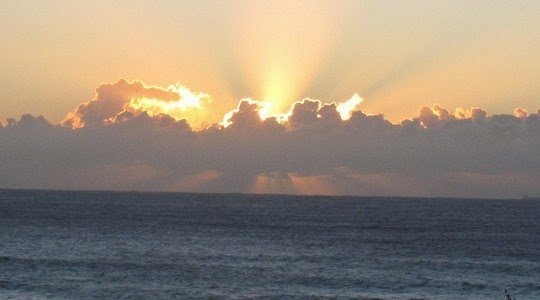 Finally, about 50 minutes after the show started, the sun slides out from behind the clouds (as shown in the title photo), a blazing yellow-white that the camera struggles to record. You can feel the warmth almost immediately.

It was a fine show of nature that a city dweller used to sleeping in until well after sunrise doesn’t normally get to see. And it set me thinking.

It was obvious the sun was just below the horizon and then behind the cloud, even though I couldn’t see it. The red to orange to yellow glow on the clouds and in the sky could have been due to an atomic bomb or a large fire, but neither explanation was very likely.

The sun couldn’t be seen, but its existence, position and colour could be inferred. Its final appearance in blazing glory was just confirmation of what was clear all along.

I’m not at all suggesting that these observations offer any evidence for the existence of God. This is rather an illustration.

I think God’s existence is a little like the sun on a dark summer morning. He cannot be seen, but the consequences of his existence are readily seen in the universe, humanity, history and human experience. But just as it is best for us that the sun’s fierce power is shaded and at a distance, so is it good for us that God keeps his distance.

But one day, like the sun, he will be seen in blazing glory.

Pictures: Blueys Beach, NSW, Australia, January 30, 2015.
The title is a quote from The Australian Sunrise by James Lister Cuthbertson – I used some poetic licence as the sun is only red for a few moments before it becomes bright yellow, and those few moments were hidden by the clouds.

« Bart Ehrman and the evidence for Jesus
Indigenous Australians, climate change and the New Testament gospels »