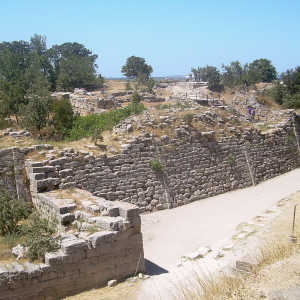 Like many people, you may wonder whether Troy was an actual city, and whether it is mentioned in the Bible. You may have seen the 2004 film, read Homer’s famous story about the Trojan war in The Iliad, or simply heard the legend of the wooden horse. Here’s five facts based on recent archaeology.

Archaeologists have excavated part of an ancient Bronze Age city at Hisarlik in western Turkey. It began as a small village some time before 3,000 BCE, and became a significant and wealthy city from about 2,500 BCE to 1,180 BCE. They believe this is the ancient city known as Wilusa (Hittites) or Ilios (Greeks), and now known as Troy.

2. It is uncertain how powerful the city was

People in western Turkey at that time spoke the Luwian language. To the east were the Hittittes in eastern Turkey, and to the west were the Mycenaeans (early Greeks) just across the Aegean Sea. These were both significant and powerful civilisations. It is uncertain whether the Luwian speakers, including the Trojans, were a minor culture often subservient to the Hittites, or whether they were a powerful grouping that was able to remain independent of both their neighbours.

3. There probably was a Trojan war

There is some archaeological and historical evidence of fighting in the late Bronze Age at Troy, around the time Homer set the Trojan War. This fighting almost certainly involved the Mycenaeans. But it is less certain whether their opponents were the Trojans, or the Hittites to whom Troy was a vassal.

4. Homer’s story and the wooden horse are mostly legendary

While there is likely some historical basis for the Iliad’s story, and some of the main characters’ names, most of the story is almost certainly legendary.

5. Troy is not mentioned in the Bible

There is no mention of Troy, Ilios or Wilusa in the Bible. Troy had ceased to exist as a significant city not long after the Israelites migrated to Canaan. There may have been a minor settlement there through Bible times up until the middle ages.

Read more about the Old Testament, go to the Is there a God home page, or return to the Q & A index page.

In Search of Troy. Joshua Hammer, Smithsonian, 2022.
Putting the Luwian Culture on the Map. Eberhard Zangger & Serdal Mutlu, ASOR, 2022.
The Luwian People from Asia Minor are the mythical Trojans. Parlia, 2020.