Christmas is about a baby. Everyone loves a baby. Especially one born to a young mother in unusual circumstances.

And everyone knows that this baby grew up to be someone special. At the very least, he was a wise teacher who taught us all to love one another. But the son of God? God himself?

How can God have a son? And how can God be in two places at once – in heaven looking after the universe and down here in a manger?

Can this christian belief make sense?

How the early christians made sense of it all

Jesus’ first followers faced some of these questions too. They had listened to Jesus teach. They’d watched him do miracles. (Whatever you think about supernatural events, historians are generally pretty sure that many people at that time believed that he had performed miracles.)

And his followers believed they had seen him do many miracles.

In particular, they had heard him say things that a good Jewish rabbi shouldn’t say.

Forgive people’s sins, when only God could forgive, via the temple sacrificial system. Talk about God as if he knew him personally as a father.

Historian Larry Hurtado has shown that Jesus’ disciples started praying to him and worshiping him very soon after they came to believe he had been resurrected. This was a somewhat shocking thing for monotheistic Jews to do, and they struggled to make sense of it.

The two obvious options weren’t open to them. Polytheism couldn’t be countenanced. Jews of all people knew that God was one. But how could Jesus be divine under monotheism?

It took a while, but they came up with the doctrine of the Trinity. Three persons but one God (= monotheism, not polytheism). Jesus was fully God, but also fully human.

It makes sense of the evidence, sort of, but it raises as many questions as it resolves.

Does the Trinity make sense?

Well, in some ways, but maybe not in others.

Three persons, one God sort of makes sense. A cube is six plane figures (squares) and one 3-D object – at the same time. So maybe God is “super personal”.

And it makes sense of Jesus being God down here at the same time as God is looking after things “up there”. Two different persons, two different places. No worries.

Different ways to use the word “God”

Some of the time we use the world “God” to refer to the Trinity, Father, Son and Spirit. The “Godhead”, as he/they are sometimes called.

Other times, we use “God” to mean the old man in the sky, the Father, the creator, the first person of the Trinity. Which can be a bit confusing.

And then other times we say Jesus is God. Not the Trinity, but “just” one member of the Trinity. I think what we probably generally mean is that Jesus shares in the divine nature, as Paul says.

But what does that mean?

In the light of what we have just said, perhaps a better formulation would be fully divine and fully human.

But that doesn’t make things much clearer.

We can see how something could be fully red and fully circular. There’s no contradiction because colour and shape are two quite different categories.

But divine and human are both describing a person. They are very different realities but not different categories (I think).

In trying to grapple with this idea to see if we can make sense of it, let’s start with the human.

It is clear Jesus was human, a man of a particular size and appearance, who lived at a particular time and place. He did and said particular things. The historians are pretty much agreed on that, even though they argue about some of the details.

Some early christians (the docetists) thought that Jesus was just an appearance of a physical man, but the rest of them rejected that. They knew he was real.

So our question is: how can a real flesh and blood person also be fully God? Fully the second person of the Trinity?

And even if we could understand that, how could a baby by fully divine? Or a zygote (a fertilised egg)?

I must say I can’t work it out. But then, it isn’t much different to some purely human philosophical problems.

The mind-body problem and consciousness

Philosophers debate and neuroscientists speculate about how the mind relates to the brain. What is consciousness?

Am I the same person as the child my mother raised? How do I know that person was also me?

Psychologist Susan Blackmore says that we can’t even say there’s a “me” at all, just a bunch of molecules constantly changing, and with an illusion of self.

I think she exaggerates a little, for there is clearly continuity between the old “me” and the present”me” – my DNA, my memories, my character, and so on. Some things change, some things not much or at all. But we can still see that “self” isn’t easily understood.

So if I can’t fully understand human self, I’m unlikely to be able to understand Jesus’ self.

The second person of the Trinity doesn’t (presumably) have DNA, though Jesus the man surely did. But he does have memories and character. So we can see how that divine consciousness could continue in Jesus the man, just as my consciousness continues each morning when I awake. They wouldn’t be present in Jesus the zygote or new-born, but neither are they present when I am unconscious under a full anaesthetic.

So what did Jesus the man know? Did he know everything because he was divine, as some people assume?

I don’t think so. The human mind is limited by the human brain – when our brain is injured or dies our mind and consciousness are affected. So Jesus’ divine knowledge and consciousness might be affected by the state of his physical body. His finite brain could hold only finite thoughts.

(Some people suggest Jesus had two minds, one human, one divine. But that seems to me to propose something quite “way out” rather than accept that we simply don’t really know.)

It all sort of makes sense, but not really

So I think we need to be careful not to claim too much.

If we’re realistic, we wouldn’t expect it to be any different. God is so far beyond our comprehension, we have to be humble about our knowledge.

Which means sitting loosely on the doctrine of the Trinity. The theologians who worked that doctrine out probably went beyond their knowledge. They formulated something that is a reasonable working hypothesis. But let’s not kid ourselves that we really understand. 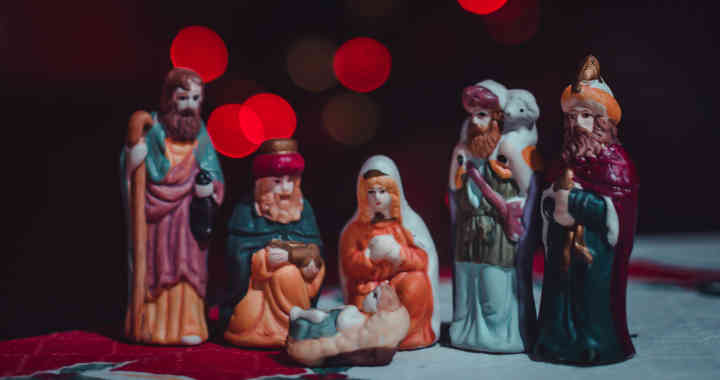 So could God become a baby?

I don’t see any intrinsic reason why he couldn’t.

We need to decide whether the evidence is there that he did. I think the evidence is strong, but certainly debatable. But I fully accept I can’t understand it as I’d like.

Have a happy Christmas remembering the baby who was divine, impossible to comprehend but very much possible to give allegiance to.

It’s quite likely that some of these musings are heretical in some way, that is, contrary to the established doctrine of some church or other. I’m not really worried. When it comes to matters like these, I think the church has tried to to define God when we can’t really know, and then insisted on this supposedly correct theology. I regard this post as interesting speculation around well-accepted theology. But our real purpose is to follow Jesus not argue about theology.