Historians want to know who wrote the New Testament (or any ancient text), when they wrote it, and why. This information helps them make judgments about whether they were in a position to know the facts they are reporting and what biases or viewpoints inform their writing.

I have written about the authors of the New Testament writings, and included some information on possible date ranges. But on this page we look at the composition dates based a new book – the first complete review of these dates for some time.

For much of christian history, it was assumed that all the NT books were written by the traditionally-identified authors, within a few decades of Jesus’ death. But in the nineteenth century, more critical evaluations began to be made, and dates well into the second century were suggested for many of the books.

Since that time, scholarship has tended towards more or less a mid-point between the earlier (lower chronology) and much later (higher chronology) dates. Currently, most scholars would date the books somewhere between 48 CE (Paul’s early letters) and 110 CE (several other epistles).

A new review of the dates 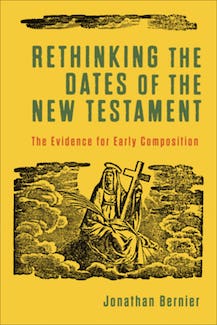 Jonathan Bernier, assistant professor of New Testament at the University of Toronto, has written what he says is the first full review of New Testament dates of composition in almost 50 years (Rethinking the Dates of the New Testament: The Evidence For Early Composition).

He says it is important that the whole 27 books be considered together, because conclusions about one may affect decisions about another – considering just one book my allow presuppositions to determine the assessed date.

Each book is analysed against these criteria, and Bernier generally supports earlier dates than the current consensus.

Here is a summary of his dates, compared to the current broad consensus (based on Bernier plus Wikipedia).

I was fascinated to follow his systematic and detailed methodology. I have never seen full justifications for the consensus dates, so I found his arguments generally comprehensive and persuasive.

It is all, of course, uncertain. As all history is uncertain. In fact, all of life is uncertain. But I feel his three criteria give him consistency, structure and some objectivity. However I haven’t seen a full discussion by a dissenting scholar.

The most important dating, I think, is that of the gospels. The closer to the time that Jesus lived, the easier it is to conclude that the gospels provide accurate historical information. So it is worth quickly reviewing his decision process for dating Mark.

Here synchronisation and contextualisation are the main critera. (We cannot be certain who was the author of Mark – the gospel doesn’t say and it is only tradition that names Mark.)

The key synchronisation question relates to the destruction of the Jerusalem temple in 70 CE. Various passages in Mark and the other gospels may be interpreted as making more sense if written before 70, while others may suggest a date afterwards. Basically, Bernier concludes:

According to Bernier, contextualisation suggests that Mark’s gospel was written in the mid 40s. He bases this on the fact that Mark doesn’t record Jesus discussing issues which became important to the church a decade or two later, but Jesus is recorded as discussing these issues in Matthew and Luke.

So he concludes Mark was written about 45 CE, and certainly well before the destruction of the temple in 70 CE.

What does all this “prove”?

As I said, none of this is anywhere near certain. And for many people, it isn’t important. They can read the gospels without ever knowing exactly when they were written.

But if Bernier is right, the gospels are closer to the events they narrate than is the current consensus. This should give us increased confidence in them as historical sources about Jesus.

We may wonder whether Bernier has come to these rather conservative conclusions as a result of a preconceived view. I cannot say, but I note that non-christian and non-conservative scholars James Crossley and the late Maurice Casey supported earlier dates for Matthew, Mark and Luke, the three books where an early date is most important.

Trust in the New Testament

If Jonathan Bernier is right, we may feel a little more reassured that the NT was most likely written by who we think it was written by, and not too long after Jesus.

But even if he’s wrong, or only sometimes right, the NT texts were broadly speaking written closer to Jesus’ life and death than is the case for many (most?) ancient figures. Whatever doubts we may or may not have about the truth of the gospels, distance from the events and hence historical inaccuracy are not serious problems.

Should you read it?

Probably not, unless you are especially interested in the dating of the NT texts (as I am). But it is good to be aware of it.

Main graphic: Portrait of the author of John’s Gospel, from an Illuminated Gospel from Germany c 875, from the Walters Art Musuem on Flickr, and papyrus P52, a small section of John’s Gospel, dated mid second century and now in the Rylands Library, photo in Wikipedia.

« World’s biggest religion?
Visions and supernatural experiences: are they real? »