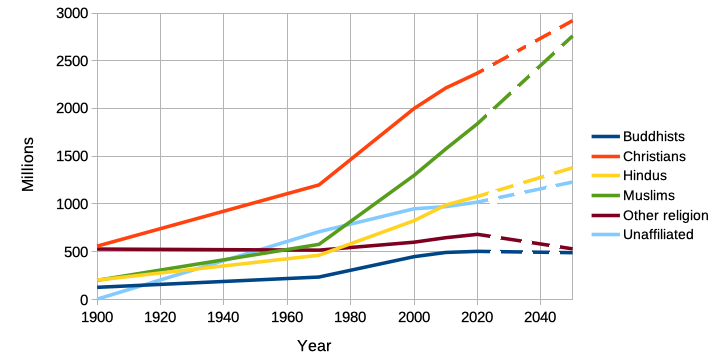 What is the world’s largest religion? Which one is growing the fastest? Is religion in decline? What is the future of religious belief?

These questions are of interest to many people, believers and unbelievers alike. Some answers are easy to guess, some may be a little more surprising.

Here’s the latest information and predictions.

Christianity is still the world’s largest religion, with 32% of the world, followed by Islam (25%), Hinduism (14%) and Buddhism (7%). Other religions currently make up about 9% of the world while “unaffiliated” (non-religious plus religious people who don’t identify with any religion) comprise 14% of the world population.

These figures are based on national censuses and other estimates (see Note on data), and so measure cultural identification. Of course the figures don’t recognise whether belief is an important part of a person’s life or not, or even, in some countries, whether people have been able to express their true beliefs. For information on committed belief, see True believers. 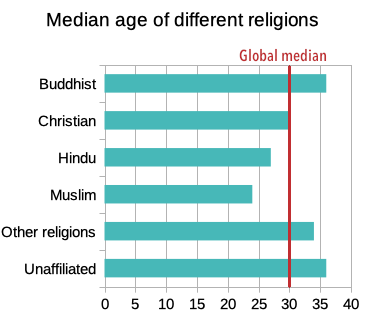 The age profile, often measured by the median age of a population, is both a cause and a result of the birth rate. Younger populations tend to have more women at an age to give birth, and the higher birth rate tends to keep the population young. Only Islam and Hinduism have median ages below the global median, while Christianity is at about the world median (see graph).

4. Number of children per woman 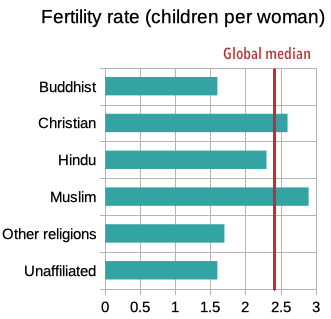 Fertility rates (the number of children born to each woman) obviously also have an effect. Muslim and Christian women have larger families on average than the global average (see graph). Hindus are below the global average but above the replacement level of 2.1 children per woman. The other groups (Buddhists, other religions and Unaffiliated) are below the replacement level and, unless something changes, will be unable to sustain their populations.

Religious switching, or conversions occur when a child raised in one religious grouping chooses in later life to change their belief. Switching, of course, can occur both into and out of any belief. Most religions (and many non-religious people too) seek to make converts, but according to the data this is a smaller factor than birthrate.

Islam, the unaffiliated and other religions are all projected to gain numbers through switching, while Christianity and Buddhism are projected to lose numbers. However the net numbers of gains and losses are generally quite small – less than 0.1 million per year.

The only significant switching is the projected net loss of about 1.5 million people per year from Christianity (about a million converts a year, but 2.5 million losses, mainly in Europe and North America), and a similar gain to the unaffiliated. But these changes are still relatively small compared to the demographic changes which are measured in billions.

Migration can make a substantial difference to religious populations in some countries, and can lead to immigrants being exposed to now ideas and religions.

All of these figures are based on how people identify, not on what they actually believe and how important (or not) their faith is to them. This information is harder to gather, and the information is somewhat conflicting.

Pew Research has slightly different findings from its surveys of four indicators of religions commitment – affiliation, importance of religion, worship attendance and frequency of prayer – in over a hundred countries. Contrary to the World Values Survey, Pew found that about half the countries, mostly located in Africa, South America and southern Asia, had positive views of the importance of religion. Prayer and worship attendance were slightly lower, but still positive in a significant number of countries. Religion is less important among the younger population in almost every country.

It is hard to know how to interpret these differences so I won’t try. We can just say that not all those who identify with a religion believe it has an important part in their life, and this trend may be greater among younger people.

The future of religion

There used to be an expectation (known as the Secularisation Thesis) that industrialisation, urbanisation, the growth of science and education would lead to a decline in religion. This has happened in Europe, once the centre of Christianity. But the global statistics on religion have led to the thesis being questioned or even rejected.

Of course, if there is a God, demographics and statistics won’t be the only factors in determining the future.

A note on data

There is a lot of data on religious identification, and it isn’t all consistent – different surveys use different time periods, or different statistics, and there is often more than one way to estimate religious populations.

I have tried to use the most recent data. Mostly I have used numbers published by Pew Centre and the World Religion Database. For the main graph, where both organisations had different figures for the various populations, I averaged the two.

« Christian belief about Jesus: how do we know what we know?
When was the New Testament written? »