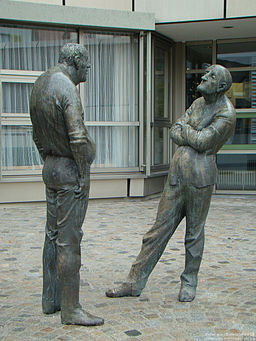 It is almost a truism that atheists in western countries have ‘come out of the closet’, and are now enthusiastically pressing christians and other believers to recognise that their faith is unjustifiable. So what are the arguments they mostly use to support this conclusion?

Over the past 6 years, I have engaged in discussions with hundreds of atheists, and have heard the same arguments many times. Here are some of the most common.

These three arguments try to show that evil and suffering are incompatible with God existing. While we can explain some level of evil and suffering by people abusing our God-given free will, it is hard to explain why God allows gross evil and extreme suffering (see How can God allow evil? for a brief outline of these issues, and God and evil for a more detailed look). The argument about the Old Testament says little about the existence of a God, but does create difficulties for those who hold a particular view of God (which includes many christians). The argument from the church is often based on bad history, is impossible to evaluate fairly, and says more about the propensity of all people to do evil when in a position of power than it says about God.

These arguments (as a group) probably have more force than any of the others.

The first argument simply asserts that science is gradually showing religious belief to be wrong and unnecessary, the second queries how God could have ‘taken a chance’ that the big bang had unfolded differently, while the third argues that if God had really created the universe, more of it would be inhabitable. If these were put in the form of a formal argument, with premises and conclusions, I don’t think a strong argument could be constructed from any of them.

God is an incoherent idea

These arguments seem to be favoured by more philosophically-minded atheists. They take the form of attempting to show that two characteristics of God (as defined by most theists) are in fact incompatible – e.g. omniscience & omnipotence; omniscience & moral perfection; just & merciful; non-physical & personal. But the arguments depend on particular forms of the definitions of these characteristics and a claim that we time-bound, physical, weak beings are able to know what it would be like to be omniscient, all-powerul, eternal, etc, and thereby to define what God can or can’t do. The arguments are (I think) easily met, and few theists would lose any sleep over them.

These arguments and claims are commonly made, especially on the internet, but they all rest on unproven assumptions and misunderstandings. The first three only apply to a believer who has no reason to believe, just faith – but despite common atheist claims to this effect, this is almost never true of christians, whose belief is based on historical evidence. The fourth argument is based on both scientific and philosophical misunderstandings.

Why is God so hidden?

This seems to be a strong reason among many who were once believers but have now given up their belief. They simply think that if God exists, he should make his existence clearer, and they cannot believe unless he does. One can understand their wish, but they seem unwilling to (i) recognise that, for many people, God is very evident in their experience, (ii) consider the reasons that believers give for this state of affairs, or (iii) accept the situation they find themselves in and base their beliefs on the evidence we have.

Sometimes people seem to present this view as a way of keeping the thought of God at a distance, but other times it seems like a real cry from the heart.

Check out the arguments

Have a look at these arguments and my assessment in more detail, plus check out some references, in Atheist arguments.

« Easter eggs and slavery
Bart Ehrman on did Jesus exist? »