If you’re reading this, you probably think about God a bit – whether in belief or disbelief. There are a lot of ideas around about God (the website that this blog is part of has its fair share!), and on the internet, in particular, it is hard to tell who knows what they are talking about and who doesn’t.

So I like to read some philosophy to get input from some of the best thinkers around. Here’s four books I’ve found helpful in evaluating the arguments for and against the existence of God.

Le Poidevin, a British philosopher and professor of Metaphysics, has written this short book as an introductory text to the philosophy of religion. However it is somewhat spoilt as an introductory text by taking a definite and explicit atheistic viewpoint which colours much of what he writes. Thus it will be more useful for atheists looking for ammunition than for a neutral reader looking for truth.

Le Poidevin covers the major theistic arguments from the origin and design of the universe, the ontological argument that God logically must exist, and the arguments relating to ethics and evil (for and against God’s existence) and he considers religion without God and the practical question of whether an atheist should fear death, all in a mere 150 pages. It is readable and concise, but there are some important matters that he has to omit to achieve this (for example, the argument from religious experience and the possibility of revelation).

Most reviewers have praised this book, though some atheists have been less impressed. Overall, I was a little underwhelmed – several of his counters to the theistic arguments seemed very weak to me. It seemed that he knew what answer he was looking for, so once he found a possible objection, he stopped there rather than subject his counter arguments to the same rigorous assessment he gave the arguments he disagreed with. Perhaps I should be charitable and assume this was only due to lack of space, but either way, it makes the book less useful.

This is the only one of the four books that attempts to be neutral – and succeeds, in my view. Davis is a Professor of Philosophy and a christian, but this book attempts to analyse the arguments for God in a rigorous and even-handed way. Only in the last chapter does he move from this objectivity and consider whether the ‘proofs’ can be useful to christian theists.

He addresses four arguments in detail (Ontological, Cosmological, Design and Religious Experience), but also considers other arguments and other forms of these arguments. In addition, he addresses background issues (Religious realism, Foundationalism) and the question of what a theistic proof might achieve – even if they do not ‘prove’ God’s existence, they may (or may not) show that God’s existence is plausible or probable.

His conclusions? He accepts that objectively, none of the arguments prove beyond doubt that God exists. They show (he suggests) that theism is a reasonable belief, and some proofs may show that God’s existence is more reasonable than any alternative conclusion. He also points out that there is much subjectivity in this, meaning that people tend to conclude according to their current viewpoints.

If you want a rigorous, detailed and fair-minded philosophical treatment, I think this is the best book. 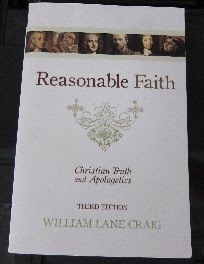 William Lane Craig is a respected academic philosopher and an effective public debater, so you’d expect his arguments to be well-rehearsed – and they are. This book is written for christians, and makes no attempt to be even-handed. His aim is to help christians understand why it is reasonable to belief, and to be well-prepared to discuss the arguments with unbelievers.

The book covers the Cosmological, Design and Ontological arguments in detail, with significant scientific background, plus material on historical knowledge and miracles leading on to the evidence for Jesus being divine and the resurrection (Craig has a PhD in New Testament studies, so is well-versed in this material). There are also chapters on whether we need arguments to know christianity is true, and ‘the absurdity of life without God’.

This is the most powerfully-argued and detailed of the four books (in fact the most effective christian apologetics book I have ever read), and very suitable for a christian, though intellectually challenging in places. Non-believers might find it more of a challenge, and might prefer Stephen Davis’ more neutral approach. I enjoyed it all, and agreed with most of what he said, but I found myself disagreeing with some of the first chapter (on why christians believe).

This book is broader in scope than the others, aiming to give an introduction to atheism by discussing critically 10 different arguments for God (including a few I wouldn’t use) and 6 reasons not to believe. David is an author rather than a philosopher, which helps explain this book’s strengths and weaknesses.

On the positive side, this book is well-written and easy to read, with generally short discussions of each argument, and Steele is fair-minded about many matters about which some of his fellow atheists have somewhat unreasonable views. Many of his points are made cleverly and persuasively. On the other hand, once you think about the issues a little more, it becomes apparent that the brevity and ‘popular’ style lack rigour, and some of his points can be easily seen to be inadequately argued.

This is likely to be a more effective book in supporting popular atheism than Le Poidevin’s, but it isn’t as rigorous (and nowhere near as rigorous as Davis’ and Craig’s books) and is therefore less useful to those who want to really think through these matters.