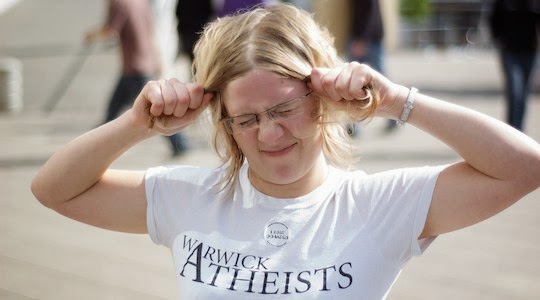 Last post I offered some thoughts on faith, based on Peter Boghossian’s idea that faith is “pretending to know things you don’t know”. I suggested that he was mistaken in what many christians think about faith.

So, do atheists think very differently to christians on this?

Everyone has beliefs, for beliefs are simply the things we think – from the simple and certain (e.g. “I like the colour yellow” or “I have a head”) to the deep and complex (e.g. “Jealousy is wrong” or “There is a God”).

‘Knowledge’ is when a belief is true and we have good reason to think it is true. We can know things by observation, reasoning, experience, or on the authority of someone else who knows.

The big problem when applying these definitions to a question like the existence of God, is that we may all believe we have good reasons for our beliefs, but we may disagree about what is true. Thus we disagree about who “knows”.

Science is a structured way of knowing using observation, reasoning and authority. However it doesn’t provide “proof” of very much (only mathematics and formal logic provide genuine proof), but rather “knowledge” with a given degree of probability, generally very high.

Many other things we know have similar high probability (e.g. I believe the external world exists but I cannot prove it), while many other things we know or believe are less certain. For example, we trust close friends, choose to vote for a candidate, choose careers, decide on what we believe is right or wrong, have favourite authors or musicians with varying degrees of certainty.

Our belief, disbelief or lack of belief in God are similarly uncertain, even though we can give reasons for our beliefs.

Atheism as a belief

Atheism is a belief in the philosophical sense – atheists think that God doesn’t exist or at least they have no belief that he does.

Atheism as lack of belief

Many atheists emphasise that they don’t actively disbelieve in God, they just lack any belief that God exists. But what does this mean?

It may mean that they have no belief either way about God, what many would call agnosticism. But do they therefore think that the existence of God is a 50/50 question – they lack both belief and disbelief?

I don’t think I have ever met a self identified atheist who would think that. I think they would all say they think the existence of God is not very likely. In other words, they may lack a belief in God but they certainly don’t lack unbelief!

If atheists agree with the proposition that God doesn’t exist (probably), then one can ask on what evidence that belief is based. I imagine most would give arguments based on the evil in the world or the hiddenness of God – arguments which perform much the same function, except in reverse, as arguments like the cosmological or the design arguments which are used to support God belief.

Would it be fair then to suggest that this was holding a belief that they cannot know?

I don’t think so. They think the proposition “No God exists” is probably true and they can offer reasons in support. The situation is analogous to the way I hold my belief in God.

But on Peter Boghossian’s terms, they are as much guilty of this as he argues christians are.

Remember I’m still using “belief” in the philosophical sense of something we think to be true. And there are many other beliefs that seem to be held by many atheists. I’ll pick just one (I have links to others below).

Atheists and the odium of religion

Religion poisons everything, Christopher Hitchens famously wrote, while Jerry Coyne is quoted as wanting to weaken religion’s “odious grasp on the world”.

Others go further. Following Richard Dawkins, some atheists accuse christians of having a delusion, Peter Boghossian says “When I speak to speak to somebody of faith, I view them as a person who really is mentally ill.” and John Loftus has said “religious faith is a mind virus” and “a public health crisis”.

Very little evidence is offered for all these claims. It seems that it’s just obvious.

But the scientific study of religion is a growing field, and has gathered significant evidence. The following conclusions are established by many scientific studies.

The evidence I can find is not all one way, but overall it shows that christian faith (and some other religious belief) is actually associated with higher levels of physical and mental wellbeing. (There is a link at the bottom to a list of studies.)

For example: In How God Changes Your Brain: Breakthrough Findings from a Leading Neuroscientist Andy Newberg says: “hundreds of medical, neurological, psychological and sociological studies on religion [show] …. even minimal religious participation is correlated with enhancing longevity and personal health”

Christians generally contribute more to society than average (this is known as “prosociality”), as I have shown before in Does religious belief make you more moral: a case study in misusing data?.

The Science on religion blog (Is religion good or bad for the world?) quotes a recent meta study: “Contrary to the forceful assertions of some prominent atheist authors (e.g., Dawkins 2006; Dennett 2006), however, the data consistently point to a negative association between religiosity and criminal behavior and a positive association between religiosity and prosocial behavior.”

There are counter examples less positive towards religion. Much evil has been done in the name of religion, including christianity. Some christians behave badly. Religious belief can be associated with bad behaviour and emotional states.

But many atheists don’t discriminate. They can generalise from the bad examples that come to their minds and ignore the larger number of good examples.

If we are going to follow the evidence, it isn’t enough to quote a few studies that seem to prove our point and ignore the many that show the opposite. And the evidence overall (as far as I have been able to find) supports the view I have presented here, and not the negative view presented by many atheists.

Defining and treating a delusion

Delusions and their treatment have a number of characteristics that don’t and shouldn’t apply to christian belief, for example:

Atheists and this evidence

Not all atheists agree with the “delusional” accusation, but those who do are clearly believing something they don’t know is true (because it isn’t true!):

Please note, I have referred all through this article to those atheists who hold certain views. I know many atheists who don’t hold these views and in fact disagree with them. I wouldn’t want anyone to think otherwise.

Note: I do not know the person in this photo – it is just a freely available anonymous photo – and I have no reason to suppose she holds to any of the views discussed in this post.

« What is faith? (Peter Boghossian vs the Oxford Dictionary)
Theists and non-theists think differently about morality »