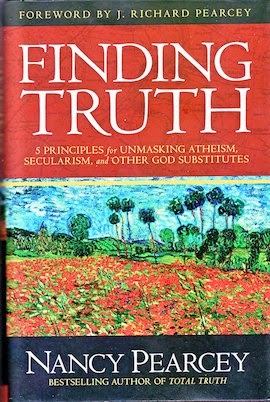 I had never heard of this book or its author until a friend bought it for me as a present. But it proved to be a really worthwhile read.

Nancy is Professor of Apologetics and Director of the Center for Christian Worldview at Houston Baptist University. She is involved in other organisations and projects, and has also written a number of books.

With that background, we can expect her to be knowledgable and able to express her ideas well. This book bears that out.

Nancy grew up in a christian family, asked a lot of questions in her youth which weren’t answered, and so became an agnostic. She later reconverted when she found answers to her questions.

“I lost my faith at an evangelical college”

One of the motivations behind this book is the story, which Nancy has heard many times, and which she lived out herself, of a child of a christian family giving up on their faith in their teens because they couldn’t get answers to the questions they were asking about God and life.

Some conservative churches and christians oppose “critical thinking” and intellectual approaches to christianity, apparently thinking that God’s word is enough, and human thinking is opposed to God. But Nancy argues opposite to this, that “critical thinking saves faith”.

We cannot hide from information these days, she says, even if we wanted to, so we must all “become independent thinkers with the tools to think critically about diverse points of view”. We must learn to be able to examine both sides of arguments.

Nancy argues that alternative belief systems – materialism or naturalism, postmodernism, determinism, etc – all take some aspect of truth and magnify it to be the full basis for their worldview. So materialism makes the created, physical world to be all that exists, empiricism says that the only things that can have meaning are what we can detect with our senses, and so on.

She then suggests a 5 step process to ….

Take materialism as an example …..

These thoughts are not new – writers and philosophers like CS Lewis, WL Craig, Alvin Plantinga and Thomas Nagel have pointed them out before now. But Nancy has expressed them in a clear way with many, many quotes and references, within a systematic framework that makes it easier to apply the thinking she recommends. I will certainly be using those quotes!

But I am doubtful if this book will make a big impression on non-believers, for it seems to me that many people these days have inconsistent worldviews, and it doesn’t seem to bother them much.

Nevertheless, I recommend this book as a good introduction to some interesting and helpful philosophical ideas.

« Christians, Muslims, miracles, visions and conversions
Choosing our religion (1): do we have free will to choose anything? »