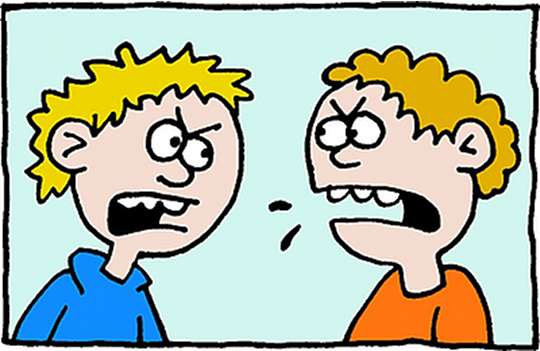 I’ve been hanging around the internet for about a decade now, often getting into discussion about religion. Some can get a little tiresome, and you can make it hard on yourself if you try to check out every reference and reply to every so-called fact. So I’ve worked out a few tricks for cutting arguments off quickly.

Here’s a few of the best.

If you don’t want to bother with someone’s argument or evidence, or if you don’t have any answer, the simplest way out is to make a personal allegation against your opponent. I don’t recommend crass insults, for they can get you banned, and they can make you look a little intolerant, which of course you are not – it is always your opponent who is intolerant. So use something a little more subtle and which sounds a little more impressive.

Calling someone disingenuous is a really excellent way to go because it makes you sound educated (even if you don’t know what the word means – let them look it up!) and is so unspecific that it is impossible to refute. But often it doesn’t matter if the word is really an insult at all. For example, by way of variety, call them ingenuous, which logically ought to be complimentary if disingenuous is an insult, but can also be seen as insulting.

Another great slur I saw the other day by a master of this approach was “you’re being intentionally obtuse”. What a great phrase, and what a fabulous accusation! For how can they answer it? Argue that they are just naturally obtuse? Hardly. Try to argue that they really do understand? This is just as good, for you have cleverly shifted the discussion from the point you found difficult to answer to your opponent having to defend themselves.

In the same discussion, this same master of their craft also said this: “you do not seek what’s true”. Again, it is virtually unanswerable, even though it may be nonsense.

You might think that these slurs are a poor tactic because there is no way you can really know that about the person, and so they are in the end pretty meaningless, but it generally doesn’t work that way. But you don’t have to show how you know these amazing insights. The important thing is to keep your opponent on the back foot and off the topic at hand. You’ll frustrate them and that way you’ll win.

Psychology is your friend

Even more effective than personal slurs is to invoke psychology – tell your opponent they are exhibiting some psychological behaviour, and use some big words. Again, it doesn’t matter that you couldn’t possibly know these things when you haven’t even met the person, the important thing is that it will sound like you are erudite and you have diverted the discussion away from the topic you don’t want to address. It is especially effective to pile one psychological diagnosis on top of another. The conversation can go something like this:

Your opponent offers an argument or some evidence.

You: “This is a perfect example of confirmation bias. Psychologists know that people like you only say these sorts of things because you can only see things that seem to maintain your unjustified beliefs.”

Opponent: “You haven’t addressed any of my evidence. I don’t think you understand.”

You: “It is really sad to hear you say that. I understand more than you realise. It is you who don’t understand – it’s a classic case of the Dunning-Kruger Effect. It’s so easy to recognise once you know.”

Opponent: “This is all an ad hominem attack. You’re not addressing any of my arguments.”

You: “I’m really sorry to upset you in this way just because I explain things logically. You are simply suffering from cognitive dissonance, it’s really a textbook case.”

You come out of this conversation sounding like you’ve read a lot of psychology and the other person is a victim of their own failings. Your position is unassailable and you look good to most of the other readers – except if you’re unfortunate enough to have a genuine psychologist reading of course, but that’s a risk worth taking.

If things get difficult – demonise your opponent

Sometimes your opponents will refuse to wilt under this psychological barrage, but don’t give up – just crank things up a notch. Accuse them of believing something reprehensible that they don’t actually believe, and they’ll have to defend themselves. If you want something a little stronger, pour scorn on your opponent by characterising their views as the product of mental illness, or perhaps rebellion against God or a refusal to use reason.

If things get heated, tell them that their viewpoint has been guilty of such terrible excesses and crimes against humanity that what they are saying is just laughable. This is a last ditch tactic which many people find quite effective, though it tends only to work if many others from your viewpoint are there to support you.

If you are reasonably fluent with words, use lots of them. Just keep going confidently, riding right over the top of the arguments. Try to sound both confident and erudite, and some people will be impressed. Use words like “obviously” even when the point isn’t really obvious at all. Sound a bit patronising – for example one expert in this method often says “You see what you did there?”, implying that they know something that is obvious to everyone else, but not to you – but fortunately they are kind enough to point this out to you.

Big words like “obfuscation” or vague apparent references to something that you can pretend you know and they don’t can also be winning tactics.

Another effective tactic is to simply change the subject. Pick something vaguely related to the topic your opponent has been talking about, make some outrageous statement about the new topic, and away you go, having moved right away from the subject that you were wanting to avoid.

Gang up on them

If your opponent is the only one of their viewpoint there, and you have a few allies, this can be a really effective tactic, and good fun as well. If you all criticise, it makes it very hard for them to respond to every point, and it looks to observers that the weight of opinion is on your side.

But better still, you can talk about your opponent in a knowing and sly way to your allies. Use many of the tactics I have suggested here without even addressing your opponent – but you know they’re reading. You can all propose all sorts of pseudo-psychological theories, and agree amongst yourselves, without ever having to offer the slightest argument or evidence to support your accusations. Great fun!

Anything but the facts

Despite all these tactics, sometimes it is hard to avoid discussing actual evidence, and that may present a problem. But I have a bunch of good tactics here.

Don’t thank me, just do it!

So that should be enough to get you out of any difficulty you get into on blogs and forums, and put you on the front foot while making your opponent look foolish or feeble.

I hope it all works for you. Noel

« The science of Genesis?
Does religion cause terrorism? »