As long as I can remember, I have had an interest in astronomy and cosmology. As a young teenager, I visited the planetarium in the Sydney Museum of Technology many, many times, to see the show about the night sky.

The stars and planets were fascinating to me. But little did I know back then how strange a place the universe is. Vast and surprising on a big scale, and strange and paradoxical on a minute scale.

For millennia humans have gazed up and the night sky and felt awe. But there’s so much more that we can’t see that way.

NASA has a large collection of space photos – rockets, planets, galaxies, nebula and the rest. All this is made freely available and the collection is well worth perusing.

The gallery has been enhanced recently by photos from the James Webb Space Telescope, which has the capability to see distant objects not previously visible. Light from distant objects reaches earth as infrared radiation because of the expansion of the universe (the “Red shift”), and Webb is able to “see” this radiation.

Of particular interest to astrophysicists is the formation of stars and galaxies. The photo above shows the “Cosmic Cliffs“, a star-forming region in the Carina nebula, a gas and dust cloud 7,600 light years away and several hundred light years in diameter. It is believed that much of the gas and dust came from the “death” of old stars in the past. The nebula contains some of the largest and brightest stars in our Milky Way galaxy (two are about 400 million times brighter than our sun, and likely to become supernova in the future) plus many newly-born stars. 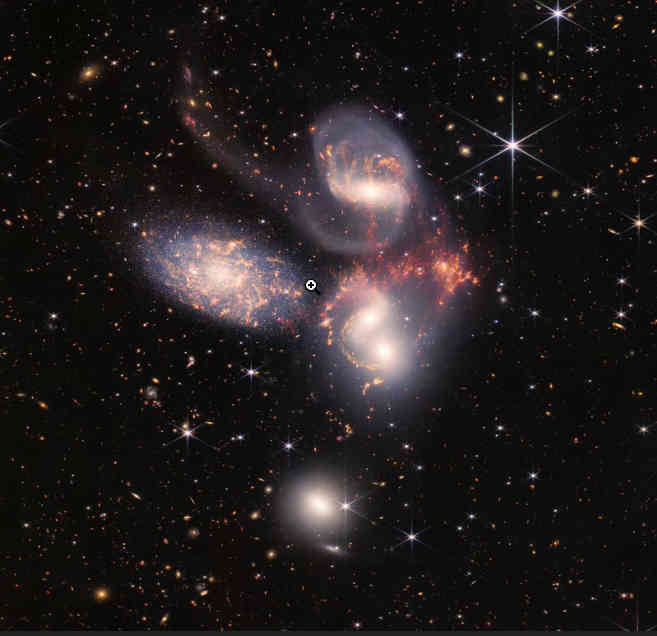 This photo shows Stephan’s Quintet, a group of 5 galaxies. Four of these, about 200-340 million light years away, interact, colliding and “pulling and stretching each other in a gravitational dance”, and are likely in time to form into one larger galaxy. The other galaxy, on the left is much closer than the others (about 39 million light years), and includes star-forming regions.

The more we can observe, the more amazing and vast the universe appears. The observable universe is calculated to be 93 billion light years across, and expanding. But there may be more that isn’t visible to us because the universe isn’t old enough for the light to have reached us yet.

(The universe is about 14 billion years old, so the most distant objects we see as they were up to 14 billion yars ago. Since that time, as the universe expands faster than light, they have travelled much further and are now up to 46 billion light years away.)

Astronomers estimate that in the obervable universe there are something like a trillion (10^12) galaxies and 10^23 stars at least. There may be more smaller galaxies that we can’t see, and of course there are almost certainly more beyond our observation.

Much more than what we can see

It turns out that the matter we can see (planets, stars, galaxies, nebulae) comprises only 5% of the universe. The remaining 95% is made up of:

Einstein and all that

Albert Einstein is famous for his theory of special relativity, which has several strange outcomes:

Weird when it gets small

The universe is comprised of space, time, matter and energy. As scientists have studied the universe, all of these components exhibit unusual properties.

When I was at school (nearly back in the Dark Ages), matter was made up of atoms, which were were composed of protons, electrons and neutrons. It was all very tidy. But somewhere along the way, it got more complex.

In the Standard Model of Particle Physics, there are matter particles (fermions) and force particles (bosons).

There are 12 fundamental fermions, including electrons, neutrinos and quarks. The six quarks include the “strange” and “charm” quarks. But only a small number of these fundamental particles play a part in our universe now (the others existed in the early stages of the big bang). Quarks are not found in isolation, but combine to form protons and neutrons. Millions of electron-neutrinos produced by the sun pass through our bodies all the time, they are small, carry no charge and have no impact on us.

There are 6 fundamental gauge bosons, and bizarrely, these create the interactions or forces between the matter particles. There are 4 forces – gravitational, electromagnetic, and the strong and weak nuclear forces. Photons are responsible for electromagnetic fields, gluons mediate the strong interaction, 3 bosons mediate the weak force which governs radioactive decay while the Higgs boson gives particles their mass, and it is thought that the as-yet-undetected gravitron may produce the gravitational force.

How does a particle mediate a force? When a particle exerts a force on another, a gauge boson passes between the two particles. For example, the repulsive electromagnetic force felt when two negatively charged electrons approach each other is felt when one of the electons emits a photon and the other receives it. I can’t say I fully understand it, but that’s how it works.

There is so much more that can be said here, but not by me. You can check it out on Wikipedia.

Particle physics, or quantum mechanics, is the study of how these fundamental particles interact and produce the physics and chemistry we are more familiar with. But it is a strange world.

According to quantum field theory, quantum fields exist everywhere in space and time and have a specific value at every point. An example is a magnetic field, which is stronger near magnetic poles or magnets. Now here’s the weird thing (or one of them!). A particle can be seen as a fluctuation in a quantum field. A field can be present even when there are no particles (a quantum vacuum), and then a fluctuation in that field causes a particle to appear. It is thought that the dark energy we met earlier may be the energy of a quantum vacuum.

There are many other weird aspects of quantum physics:

The normal laws and the familiar ways things work just don’t apply at the quantum level.

Mathematics: a different kind of strangeness

We start learning mathematics at an early age, with simple arithmetic (counting) and geometry (shapes). Later on, perhaps, we may learn algebra, calculus and trigonometry which are much less straightforward and often have little application to our daily lives. Many of the theorems we learn (or avoid!) are theoretical, and can be proven without resort to real world observation or experimentation.

But some scientists, especially physicists, use mathematics all the time. Physical formula are written in mathematical form. Complex mathematics is used to solve physics questions. And some scientists are astonished to find that the physical universe we inhabit seems to behave mathematicaly, everywhere and at all times. Somehow, something that is abstract and in a sense doesn’t exist in a tangible way, nevertheless controls everything that happens.

Some mathematics is actually impossible to realise in the real world. An example is imaginery numbers (the name says it all!). It is impossible to calculate the square root of a negative number. Yet the imaginery number i, which = the square root of -1, is an extremely useful concept in electrical and other calculations. So an abstract non-physical something that can’t actually exist helps describe the real world.

Nobel laureate physicist, Eugene Wigner wrote “the enormous usefulness of mathematics in the natural sciences is something bordering on the mysterious and … there is no rational explanation for it”.

So much about the universe, on the large scale and on the small scale, is surprising to us and contrary to what we experience and what we regard as “normal”. We naturally want to find answers to questions.

Science is in a sense based on trying to answer questions about how it all works and came to be the way it is. We (the scientists, not me!) are slowly discovering answers.

Philosophy and religion, on the other hand, ask questions about cause and purpose and ultimate reality.

How did it all get here?

This is the most fundamental question of all, asked for millennia. How did this universe come to exist, apparently out of nothing. As we understand how vast the universe is, this question becomes more pointed. How could such a vast universe appear out of nothing? Or, how could such a dynamic universe always have existed – wouldn’t all the scientific processes have “run down” in an infinite past?

It is no wonder that so many people have concluded that the universe didn’t appear out of nothing, but an infinite God made it. Either the universe had no cause, which seems crazy, or something that has always existed started it off. This is the basis of the Cosmological argument for the existence of God.

If God created it, why so vast?

If we were designing a world for humans to live in, we’d do it much more efficiently, surely? Why so much universe? I can think of several answers:

Cosmologists have found that while the universe looks chaotic and random, the laws that govern it are anything but. If it occurred randomly and evolved randomly, the probability is almost zero that it would last for long, take on a form that allows stars and planets to form, and provide conditions and time for life to evolve. This is sometimes called “fine-tuning”.

But if it wasn’t random, what caused it to be so well designed? Perhaps there was a designer?

Does mathematics point to God?

This isn’t such a strong argument, but some people believe the mystery of why mathematics works so well in the physical universe suggests it was designed. Read more at Does mathematics prove God?

I’ve put links to most of the science in the text. Googling will always lead you to more references.

But if you want to check it out more thoroughly and systematically, I recommend the book A Fortunate Universe: Life in a Finely Tuned Cosmos by astrophysicists Geraint Lewis and Luke Barnes, reviewed here.

Space photos by NASA show the “Cosmic Cliffs”, a star-forming region in the Carina nebula (top) and Stephan’s Quintet (5 galaxies, 4 of which interact).

« If there’s a God, what next?
Can humans be reduced to atoms and electro-chemical processes? »