They say that if you can remember the sixties, you weren’t there.

But I turned 20 in 1965, and they were very formative years for me. A friend gave me my first Bob Dylan record on my 18th birthday, and that changed my life. Quite literally and definitely. Switched me on to social justice and the purpose and value of life.

And things I observed and saw back then seem to be especially relevant in today’s crazy world.

The sixties – the good, the bad and the ugly

The sixties were a time of idealism and aspiration, at least for people my age. There were the hippies, the summer of love, new freedoms, and a reaction against some of the certainties of the older generation.

Race was one of the issues on which youthful US idealism focused a spotlight. The mistreatment of African-Americans had been a festering problem ever since Africans were forcibly removed from their own lands and brought to work as slaves in the US. The end of slavery was only the start. Prejudice, inequality and outright hostility remained the experiences of many for generations.

And so, over the years, there have been many race-based riots and demonstrations across the US.

In the middle sixties, much of this came to a head. There were race riots all across the country from 1963 onwards. The Watts riots in California led to 34 deaths (most shot by police and the National Guard) and $40 million of damage. The McCone Commission identified the main causes as “high unemployment, poor schools, and related inferior living conditions that were endured by African Americans”. 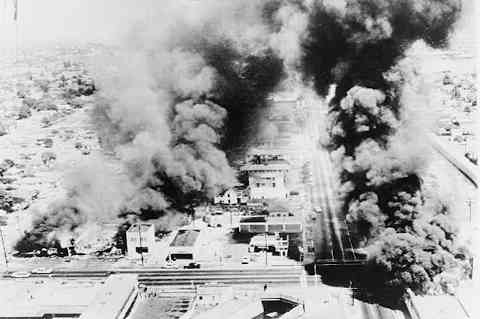 At the same time, some young middle class whites began to demonstrate and support the cause of equality and an end to prejudice and discrimination. “Protest singers” (so-called) like Bob Dylan and Joan Baez sang about the cause. Dylan songs like The Lonesome death of Hattie Carroll and Only a pawn in their game highlighted race issues, and The times they are a-changin’ proclaimed that things were going to change for the better.

The changes that love would bring?

Looking back a decade later, Jackson Browne was disillusioned. His song The Pretender (surely one of the saddest songs ever written) portays the idealists of that era seeing “the ships bearing their dreams sail out of sight.”

And in 2020, the cities are burning again. Race is still an issue. And black Americans still suffer prejudice in many places.

The US casts a long shadow over the world.

Much of it benefits people like me who live elsewhere. Many of us get most of our pop culture from the US (for good or ill!). Our computer software probably originated there. And even a pacifist like me has to admit that World War 2 may have turned out very differently if the US hadn’t entered the war.

But at the same time, to an outsider at least, the US seems to be diving into madness.

And all this in what is sometimes seen as the most christian nation on earth. So where is the church in all of this?

Sadly the US church seems to have mostly forgotten who they are supposed to be following. It sometimes seems that the US church is more about patriotism and conservatism than about Jesus.

I think a lot of this comes from naivety rather than ill will. It is too easy to believe people who press the right buttons, even if they don’t exhibit or support the character of the kingdom of God. Nevertheless, it seems to be having dire consequences.

Who you gonna believe?

One of the outcomes of a church that seems cut off from science, truth, compassion and justice is that it loses credibility. Polarisation strengthens the church’s conservative base, but alienates the very people the church should be wanting to serve and win over.

Over the years I have discussed religion and philosophy with many atheists, and read many blogs by non-believers. Some of them have become friends, others have been influential. Too many were brought up in christian families and have walked away from their childhood belief.

There are many reasons for this, but one of them is that the church, and christianity, has lost credibility and moral authority. Many of these non-believers have ethics and a sense of social justice that are closer to the teachings of Jesus than the attitudes of many christians.

So many non-believers consider christianity has been tried and found wanting. They think too many christians continue to blindly follow where they are led.

They think it is dangerous. And they would find it very difficult to believe in Jesus because of these attitudes.

Yet it doesn’t have to be that way. A church following the teachings of Jesus on materialism, concern for the poor, compassion, justice, non-violence, forgiveness and serving would be very attractive to many.

So how will it end?

This may be a crucial time in the US. There is a presidential election this year, and another 4 years of polaristaion and harsh treatment of those seen as adversaries may change the face of the country for a generation.

Will the christians wake up to what is happening?

Will the church become light and salt again, serving the community in love and truth rather than being polarising and condemning?

Will the US move towards justice and wellbeing for all, or away from it?

The answer is blowing in the wind.

But we can hope that more police, christians and whites have the attitude displayed by these Miami police, who, when faced with protestors, “took the knee” and apologised. It defused the situation and led to reconciliation and a peaceful demonstration. 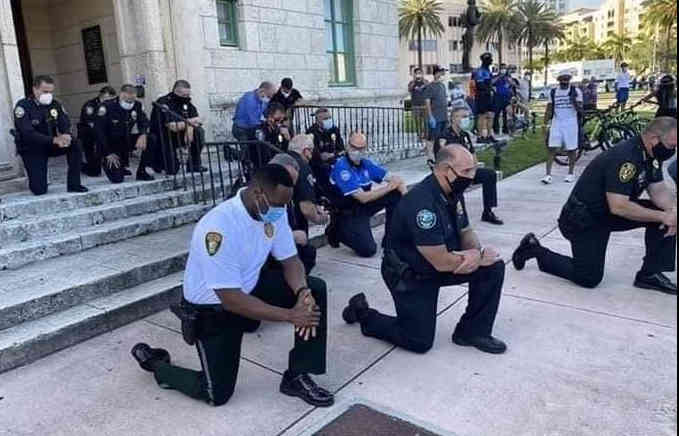 Note: I am normally reluctant to say too much about events in the US because I don’t live there. But the US has a large influence on the rest of the world, including the influence of the US church on christianity around the world. Many in the world are watching current events with alarm. Sometimes we need to speak.

Photos: (1) Joan Baez and Bob Dylan, Civil Rights March, Washington, DC, 28 Aug 1963 (Rowland Scherman on Wikipedia. Public domain.)
(2) Burning buildings during Watts Riots, Aug 1965. (New York World-Telegram on Wikipedia. Public domain.)
(3) Miami police take the knee and build bridges to protestors. I don’t know the original source of this photo, but it was being shared on Twitter and Facebook so I assume it is OK to use here as fair dealing. I will remove it if I am mistaken about this.

« If there’s a God, why doesn’t he answer our prayers?
Pythagorus and God »