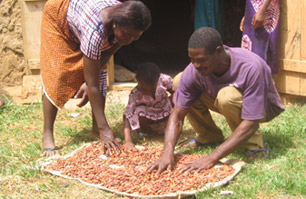 Back in November I reported on exploitation in the world cocoa trade in My pleasure, their misery?. At that time I wrote about this to two prominent chocolate manufacturers.

I subsequently reported (Fair Trade chocolate – report 1) that I had received a reply from Cadbury indicating their ongoing support for Fair Trade products. I think they could do more, but it is encouraging that they have come this far.

Now, more than a month after I wrote to Darrell Lea, I still have not received a reply. Of course, Christmas is probably their busiest period, so I may hear from them in January. We shall see.

Anyone want to join in writing to Darrell Lea, and also to Nestle, Lindt or others?

« The cosmological argument for the existence of God
Jesus and God, honesty and hope »