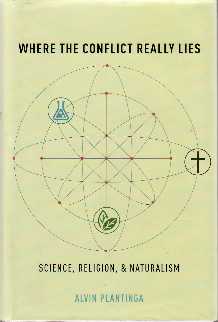 For many people it is virtually an unquestioned assumption – science and christian belief are incompatible.

But this book by eminent philosopher Alvin Plantinga turns that on its head – he argues that science and theism are very compatible while it is science and atheism/naturalism that are incompatible.

Plantinga opens his book with his central claim:

The book covers the following topics:

Apparent but superficial conflict between science and theism

I found the book got better as it went on, primarily (I think) because I don’t feel there is any reason to think a theist cannot believe in evolution nor that science puts any constraints on God’s possible actions in the world. But it was good to read Plantinga’s analysis of these questions.

Plantinga addresses these concerns through the concept of ‘defeaters’. A defeater is a fact or argument that gives reason to disbelieve or doubt a belief. He argues that the science on which evolutionary psychology and Biblical criticism rests is naturalistic, that is, it assumes that there is no God. So, he says, if a christian believes there is good reason to believe in God, he can accept the science without seeing at as being a defeater for his belief, because his belief is based on evidence that the science doesn’t use. Of course some beliefs may be defeated by science (e.g. an earth-centred universe), but most won’t be.

Where science supports theism and seems incompatible with naturalism

Plantinga spends some time on the design of the universe and the alleged ‘Intelligent Design’ of human evolution. He looks at the cosmic fine-tuning from a Bayesian probability perspective, and concludes that the argument offers only mild support for theism. His discussion of biological intelligent design has been much criticised by those who follow evolutionary orthodoxy, but I think it is quite appropriate.

It is appropriate that a philosopher considers all possibilities, and he doesn’t suggest that the ID proponents are correct. His conclusion is that ID doesn’t work as an argument for theism, but that the discussion (he calls it a “design discourse”) suggests that it is natural and reasonable to think there is design behind evolution.

Of most interest to me were the his discussion of “Christian theism and the deep roots of science”, where he discusses how many aspects of the universe are surprisingly regular, lawful and mathematically explicable, which we mightn’t expect from naturalism, but might expect from theism, and his evolutionary argument from naturalism which suggests that, granted the scientific truth of evolution, makes naturalistic belief self-contradictory. I will post more on these two arguments.

This book is not a knock-down set of theistic arguments, such as those provided by WL Craig in his Reasonable Faith (see Books: the philosophy of God. But Alvin Plantinga is one of the most respected philosophers in the English-speaking world today, and this book is a subtle, thoughtful and fair-minded examination of some very interesting questions. It has given me plenty to chew on, and a few arguments to work through and use.

I would hesitate to recommend it to atheists who are waiting to be convinced of christian belief, nor to christians who are looking for ammunition. But if you want to be extended in your thinking, this book might do that, as Philosopher Thomas Nagel also found.