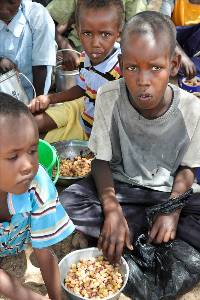 In 7 billion and counting I raised concerns about world poverty in the light of the world’s population reaching 7 billion people. But how big is the need, and how much would it take to bring some relief for those who most desperately need it?

In the long run, a lot of different changes need to be made to lift more than a billion people out of poverty and exploitation – we’ll look at some of them in future posts. But most of those actions take time, and help is needed now. It has been estimated that about $US50 billion per year is required to eliminate poverty worldwide.

Putting this in perspective

$50 billion sounds like a lot of money, but it isn’t so much when we compare it to these expenditures:

In 2009, the world spending on aid was about $US120 billion, more than enough if it was properly directed and poverty was the only issue. Unfortunately, the poor are still with us.

What can you and I do?

Philosopher Peter Singer has written about eliminating world poverty in his 2009 book, The Life You Can Save. He has suggested a scale of personal giving to world poverty of 1-5% of income, with the percentage starting low for lower incomes and rising with higher incomes. He invites people to pledge to give this amount.

It is clear that most of us in the western world could afford to meet this challenge with only a small sacrifice. Some would give this amount and more already. There are other, and perhaps better, things we might do in the long term, but this is surely a very important beginning

I invite you to join me in reviewing financial priorities to see whether this commitment is one we should make.

« Do christians fear death?
Does religion cause wars? »