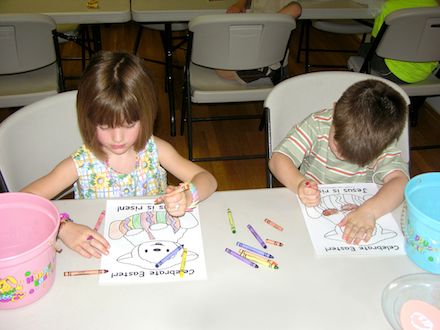 Many modern atheists oppose the teaching of religion to children. Richard Dawkins has famously said that teaching religion to children is a form of child abuse. In 2004 he wrote: “Isn’t it a form of child abuse to label children as possessors of beliefs that they are too young to have thought about?”. And in 2012 he said: “We need to protect children from being indoctrinated.”.

But what if belief was their natural state? Some interesting studies suggest this is the case.

Atheists and the science of religion

There is a lot of interesting research being done, by both theists and atheists, into how people hold religious beliefs and what is going on in their brains when they attend to their belief. Yet it seems that some atheists (and probably many christians too) are not very interested in this research – which is surprising if they profess to base their views on science. For example:

Barrett has studied how religious beliefs are formed in the brain (“the cognitive science of religion”) and previously published a book on this topic Why would anyone believe in God?, which concluded (in the publisher’s blurb):

belief in God is an almost inevitable consequence of the kind of minds we have. Most of what we believe comes from mental tools working below our conscious awareness. And what we believe consciously is in large part driven by these unconscious beliefs. Barrett demonstrates that beliefs in gods match up well with these automatic assumptions; beliefs in an all-knowing, all-powerful God match up even better. Barrett goes on to explain why beliefs like religious beliefs are so widespread and why it is very difficult for our minds to think without them.

Now Barrett has published a book on children’s belief: Born Believers: The Science of Children’s Religious Belief. In it he argues that children across the world learn from an early age the difference between living and inanimate objects, that some objects care for them and respond to them, and that there seems to be order and purpose in the world. These and other facts naturally lead them to the conclusion that there is “at least one creative and intelligent agent, a grand creator and controller that brings order and purpose to the world.” So it is natural for children to believe in a God who provides meaning, ethics and security, and to believe in an afterlife, and this natural belief tends to continue into adulthood.

Barrett criticises those who argue that religious belief in children is the result of indoctrination. Based on “considerable research on the relationship between religious commitment and psychological and physical well-being”, he points out that religious beliefs “tend to better physical and mental health” and that believers are “psychologically healthier and better equipped to cope with emotional and health problems than non-believers”. Therefore he says rather than indoctrination, parents can responsibly encourage children’s natural religious development.

How do these findings change things?

Atheists can fit these findings comfortably into their beliefs. The fact that belief in God is “natural” to children doesn’t necessarily make it true – it could just be a leftover evolutionary byproduct. But it does make it harder for them to claim that religious belief is the result of indoctrination and inevitably harmful, and that it is feasible and desirable to eliminate it.

Christians need not fear these conclusions either. Barrett is himself a christian, and doesn’t think that improving scientific understanding of belief is any threat to his faith – in fact he seems to find his conclusions reassuring: “Why wouldn’t God, then, design us in such a way as to find belief in divinity quite natural?”

Read reviews of the book by Jesse Singal of Princeton University, and B Hodges, and Barrett answers ten questions (in 2006).

« Lawrence Krauss and creation from nothing
An atheist convert »