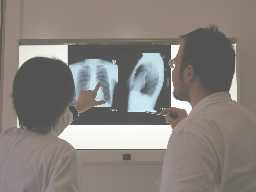 I came across another story of an apparently miraculous healing the other day. But can I believe it really happened and it was really a miracle?

How can we avoid both naive gullibility and closed-minded scepticism? Does it really matter?

The Suffolk News-Herald reported last week that Scott Toney, a fitness instructor, was diagnosed with follicular lymphoma, a low grade cancer of the lymph system, almost a year ago. The doctors advised him it had progressed past the point of being curable, but could be delayed by chemotherapy, and gave him between 5 and 12 years to live.

After visiting several cancer treatment centres, Toney decided to postpone chemotherapy and try alternative treatments – organic foods and prayer – and he attended two healing services where people laid hands on him and prayed for healing.

When he finally went in to begin the chemotherapy, the doctors took some more scans and were surprised to find that the cancer had gone, for no apparent medical reason. Toney attributes his healing to prayer:

I attribute it to prayer. I feel there was something divine happening there. When I walked out of the hospital, I said, ‘I think I have been healed by God.’

I have been looking recently at how we might best test whether apparent healing miracles are genuine (see How should we assess healing miracles?), and believe the following criteria need to be satisfied:

Applying these criteria to this story

It becomes clear that this story falls somewhere in the middle. There is reasonable evidence that something unusual happened, but it isn’t clear if it was unusual enough to demonstrate it was a miracle. We don’t have a clear medical statement backed by documentation, though we have some indication of medical opinion.

If I was Toney, I would be thanking God for my healing. Perhaps it wasn’t God, but perhaps it was, and it is always better to be thankful than not. If I was an unbeliever, I would argue that there wasn’t sufficient evidence to claim a miracle, though I think I would agree that it was a little unusual.

Me? I wouldn’t claim it as a miracle, but I’m inclined to think God had a hand in it. Time will tell. I certainly wish Scott well, and hope his healing continues. And the longer it does, the closer this healing will come to meeting the criteria.

You can read about other healing miracles which appear to more clearly meet the criteria and offer good evidence that divine healing has occurred: