How many cases of miraculous healing does it take to show that God exists and sometimes heals people?

We can never prove that a healing has taken place, but if a number of people experience unusual recoveries from serious illnesses where people rarely recover, then we can know that something unusual has happened.

And if these unusual recoveries happen close after people prayed for them to receive healing, we surely have plausible evidence that God may indeed have been at work.

An experienced medical researcher examined the case histories of these ten people, talked to specialist doctors and considered the evidence. He found that natural recoveries weren’t likely, so it really seemed that God healed these people, miraculously.

So we have ten people, all prayed for by christians who believed in divine healing, and they were all healed, quite unexpectedly and inexplicably. That is surely enough to make any open-minded person think.

At the very least, we can say that something quite unusual happened in each case.

Coincidence? The odds seem against it.

Poor diagnosis? The documentation is too comprehensive.

Lies? Again the documentation suggests not.

Real miracles? The evidence seems to point this way.

Conclusions on these healing miracles

The doctor and the investigation

The late Dr H Richard Casdorph was an experienced doctor and medical researcher. He published more than eighty research papers in a career that spanned almost 6 decades, and earned the respect of his fellow doctors. 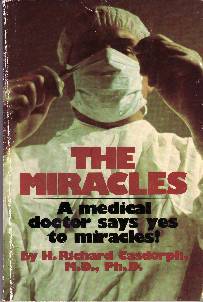 In the mid 70s he undertook a research project with a difference. He interviewed ten people who claimed to have been miraculously healed of serious conditions. He examined all the case histories – X-rays, medical reports, etc – and also submitted them to medical specialists for review.

In all ten cases, the evidence showed that an unusual healing had taken place after the patient received prayer for healing. The cases were written up in a book, The Miracles, which includes some of the X-rays.

Lisa was diagnosed with cancer of the hip when she was 12, and was unable to walk unaided. Her family, who were Catholic though not very religious, decided chemotherapy was too traumatic and called it off after one dose.

A family friend invited the family to a christian healing meeting conducted by ‘healing evangelist’ Kathryn Kuhlman (see note below). The friend fasted and prayed for a week beforehand.

During the service, Lisa felt a warm feeling in her stomach. Kathryn Kuhlman said someone in her section of the auditorium was being healed from cancer and should stand up.

Against her mother’s wishes, Lisa stood up and was able to walk without pain for the first time since the problem had appeared.

She was X-rayed several times after that, and it became clear that something strange had indeed occurred. Further X-rays (reproduced in the book) were taken and reviewed by several doctors. These showed that Lisa’s hip had been fully restored and the cancer was gone. There was no natural explanation.

You can see Lisa and her mother talking about this healing in the first half of this short video.

Elfrieda was ‘critically ill’ with chronic rheumatoid arthritis. She was unable to walk or dress herself.

She was taken to a healing meeting by her husband. She had avoided going because “she did not believe in that kind of thing”. But after much prayer by her husband and urging by some friends, she agreed to go.

During the meeting she felt that parts of her body that had been in extreme pain were becoming pain-free, and she was able to move them.

In 1970, at age 44, Marie started suffering from severe headaches. She underwent brain surgery, and a tumour was removed, but the surgeons could not remove it all, and the biopsy showed it was malignant.

The tumour began to grow back, and Marie was not expected to live.

The family decided to spend an evening praying for her healing, and her husband stayed up all night. He had a vision of the tumour being healed, but Marie seemed little improved when she woke.

However she stopped taking her medication, and continued to improve. Her neurosurgeon confirmed the improvement, with some amazement. She was eventually healed.

The book discusses the medical documentation and reproduces arteriograms.

When multiple sclerosis first affected Marion in 1958, she was pregnant and not yet 30. She felt numbness in her hands, kept falling over, and generally started losing coordination.

However it was not diagnosed for four years, by which time she was deteriorating steadily. Ten years later, she had multiple symptoms:

A friend visited regularly to pray for her and she invited her to a Kathryn Kuhlman healing meeting.

Marion at first refused to go, but eventually was taken in a wheelchair. She can’t remember exactly what happened, but during the service she found herself standing up, with her back and limbs straight for the first time in years. She began to walk immediately.

Later her surprised doctor found she had been healed of all symptoms, including the deformities. She and her husband became strong believers in Jesus because of this.

Arteriosclerotic heart disease was (and I assume still is) the most common cause of death in the western world. Marvin Bird had his first heart attack at age 46, and over the next 16 years was hospitalised 17 times because of his heart condition.

One artery was completely blocked and the others were half blocked (as shown in angiograms reproduced in the book). However he declined a coronary artery bypass because, at age 60, he didn’t think he would survive surgery.

He attended a healing meeting even though he wasn’t then a believer. An assistant believed he had been healed and invited him to stand up. He couldn’t previously do this on his own, but now he was able to.

Doctors later confirmed he was fully healed, and Marvin started to attend church and believe in Jesus.

In 1972, Ray Jackson had a kidney removed in the Duke University Medical Center because of cancer. He recovered well, but two years later doctors had to remove a finger because they found cancer had spread there.

Shortly after they found cancer in his spine, pelvis, breastbone and leg, and this time surgery was out of the question. (Two bone scans are reproduced in the book.) He was booked in for radiation treatment, but advised he could expect to live no more than a year.

Many friends were praying for his healing. Before he began the radiation treatment, Ray woke in the night to hear a voice tell him he would be healed. The next day he attended a ‘Kathryn Kuhlman miracle service’, during which the pain disappeared instantly.

Tests the next day still showed the lesions, but subsequent tests showed that healthy new bone had filled in where the lesions had been. This case is notable because of the wealth of medical detail available from Duke to confirm the healing.

Pearl was a doctor of speech therapy who, for most of her life, had suffered from a range of medical problems, including arthritis, kidney, gall bladder and liver problems.

By the time she was in her sixties she had to wear long-leg braces whenever she was out of bed because of weak knees and many falls. Other physical problems (fainting, headaches, nausea and digestrive problems) also worsened at this time.

A devout christian, she began praying for healing in her late seventies, then finally managed to get to a healing meeting. During the meeting she felt an unusual ‘grinding’ sensation in her body, beginning with her left hip, gradually moving around her whole body and ending in her neck. She couldn’t take the leg braces off in public to test her healing, but next morning she was able to walk unaided and regained full movement.

She was fully healed.

Over just a few weeks, Anne began to have serious problems reading, speaking and remembering.

A series of brain scans, some of which are reproduced in the book, and visits to different specialists revealed she had a lesion that was increasing in size, consistent with a tumour.

However following prayer from a prayer group and at a healing service, further scans showed no evidence of an abnormality.

Dr Casdorph comments: “This lady’s brain abnormality was well documented by the standard diagnostic techniques and she was seen by many specialists.”

Paul, a successful businessman, was admitted to hospital with severe gastrointestinal bleeding after fainting several times. He required many blood transfusions over several days.

He had only recently begun to attend church, and his minister visited one morning and prayed for him. The minister said that he had been healed, but doctors would not release him from hospital until his condition was re-tested.

All tests showed the bleeding had ceased and there were no abnormalities. Paul’s condition before and after were “well documented by medical records”.

Delores had severe spinal problems and pain for years. She had four spinal fusions and two cordotomies (a procedure that disables part of the spinal cord to reduce pain, but results in no feeling in the legs).

For fourteen years she wore a body cast and neck brace to relieve the pain and enable her to walk.

At the end of this time, the doctors told her there was little they could do for her, she had so many conditions, but she could prolong her life by staying still in bed, advice she was unwilling to take. She was expecting to die.

Although she was a christian, she didn’t believe in divine healing. But she was persuaded to attend a Kathryn Kuhlman meeting.

She experienced a burning sensation in her legs (the first thing she had felt in her legs for a time) and was completely healed. She was also strongly renewed in her faith.

Finally there is her doctor’s acceptance that she had “gotten an excellent result physically”.

We can be confident

It seems to me that this evidence gives us confidence to believe that God does sometimes heal, even if he doesn’t do it as often as we’d hope. It’s hard to believe that every one of these ten recoveries had natural causes!

Note: Many of these cases involve the healing evangelist Kathryn Kuhlman. She was a controversial figure who many felt was not authentic while others believed her to be a prophet. I report these cases without making any judgment either way on Kathryn Kuhlman’s life or ethics. The truth or otherwise of these accounts depends not on anyone’s opinion of her, but on the medical evidence.

I note that Wikipedia reports Craig Keener as saying: “No one claims that everyone was healed, but it is also difficult to dispute that significant recoveries occurred, apparently in conjunction with prayer. One may associate these with Kathryn Kuhlman’s faith or that of the supplicants, or, as in some of Kuhlman’s teaching, to no one’s faith at all; but the evidence suggests that some people were healed, even in extraordinary ways.”