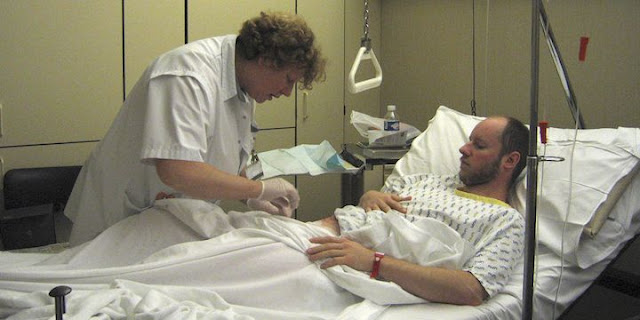 I sometimes get into discussions on the web where the subject of prayer, healing and the existence of God come up. Distressingly, they too often seem to take a similar course.

The way it goes

A recent discussion was kind of typical, and serves as an example to begin my musings. A blog commenter said:

If Christian prayer was really as effective as Christians claim it is, we should see dramatically lower illness, accident rates, and death rates among Christians compared to members of other Faiths (or no Faith) in the same society and social class.

There is zero evidence that such a disparity exists.

I felt this was a strong over-statement, not backed up with evidence, so I responded by asking for any evidence the commenter had and pointing to some contrary evidence. I then added that I wasn’t suggesting all prayer is answered, or that my evidence proved God existed, simply that the medical evidence was contrary to his statement.

Discussion followed from there, beginning with the commenter agreeing he had no evidence for his statement, but seeking to dismiss the evidence I offered, and finally arguing that the health improvements in evidence weren’t large.

Let’s look briefly at the evidence, and at the common responses from unbelievers and believers.

Evidence for christian healing and health

There are several different types of evidence.

This is the strongest link, well established by scientific studies, most of which involve christian subjects (i.e. the studies are in the US). On average, religious belief and practice is associated with significant improvements in physical and mental health (see these studies, summed up in Faith and wellbeing). For example:

Of course there are exceptions and variations, but the general picture is clear. Overall, the evidence is for a small but significant improvement in health for religious believers. But I think you’d have to say the 28-46% reduction in mortality and the enormous reduction in the progression of HIV/AIDS are “dramatic” improvements. Whether they are caused by the action of God or a psychological effect, or both, is arguable.

These are properly designed medical/scientific studies, but they aim at assessing prayer as a natural medical therapy and not as a possible initiator of divine action, and they don’t measure prayer as it is generally practiced by christians. So they are of limited value for the question we are discussing here.

Sceptics often triumphantly quote a study by Benson et al which shows that prayer had no positive effect, and that was part of the discussion I am referring to. And it is true that this is probably the largest and most comprehensive study of prayer as distant therapy. But there have actually been scores of studies of this type of prayer, and I have been able to reference 26 reports covering more than 60 studies, and these show a 2:1 result in favour of a positive effect of intercessory pryer of this type.

I personally don’t regard this as evidence of God healing, for the effect is small and it is a natural effect that is being measured. But if anyone is going to quote this type of study, they should reference the full set of studies.

Christians view prayer as a request to God, not a “distant therapy”, so this approach avoids the artificial set-up of the distant therapy tests, and tries to test christians praying for healing in their normal situation (say at a healing event). This makes the science and statistics more difficult (e.g. it is hard to set up a “no prayer” control group) but it measures the real thing. People seeking prayer are medically tested before and immediately after being prayed for and any improvements documents.

I’m only aware of one such study so far, where an American academic tested 24 consecutive patients seeking healing for a problem with eyesight or hearing (these were selected because they were easy to measure quickly). She found “highly significant improvement in hearing” and “significant visual improvements”. Some patients experienced little or no improvement, but some of the improvements were dramatic.

I hope and expect more such studies will be undertaken, but this one is a significant start.

Medical studies after the event

Apparent healings cannot be produced on demand, so are difficult to test scientifically. But there are many such cases (estimated to be more than 300 million), so it is foolish and incomplete to ignore them.

Many people believe they have been healed, but most are never tested, and their story remains meaningful to them and a few friends and relatives, but not helpful in assessing whether divine healing occurs. But sometimes doctors and patients make public the before and after medical tests that indicate that an unusual recovery has occurred. I have found documentation of a number of cases, including:

There are many more such accounts, some with good medical evidence, others more based on unsubstantiated reports. It is always possible that there is a natural explanation for these apparent healings (e.g. there was an initial misdiagnosis), but the extent of the documentation and the number of cases makes it difficult for me to believe that all of them can be explained this way.

The conclusions we draw will generally be influenced by the worldview we hold. So if we want to be evidence-based, we need to be careful.

Most unbelievers claim to base their views on evidence, contrary, they say, to christians. But it is difficult to see this if they respond in any of these ways (all of which I have experienced):

I can understand their dilemma. They believe there is no God and no divine healing, and that most alleged examples are frauds, mistakes or urban myths. So why bother spending time on them?

But I suggest it would be better to at least acknowledge that they haven’t examined the evidence closely, and their view is a dogmatic one, and not attempt to use any studies or any statement about evidence in discussion until they have looked carefully at the evidence. At best, they might allow the evidence to shift them at least a little towards agnosticism.

A matter meriting more discussion is how much evidence should we require to believe a miracle has occurred.

It is true that divine action cannot be “proven” in even the most remarkable of recoveries, because we cannot measure God’s actual actions, only the effects – and it is always theoretically possible there is some unknown natural cause. But honest sceptics must be careful that this doesn’t become a way of avoiding new knowledge that they find unpalatable.

If extraordinary recoveries occur repeatedly after prayer for healing, a reasonable person would surely start to wonder if there was a connection rather than look for loopholes.

If unbelievers would benefit from re-examining their scepticism, believers may be well served by examining their gullibility. It is understandable that a christian will give thanks for apparent blessings by God (after all, if they thank God for something he didn’t do, no-one is harmed – it’s always polite to be thankful!). But truth isn’t well served by making claims to non-believers that cannot be supported by the evidence.

In considering these questions, I have tried to gather as much evidence as I can. I avoid stories that have insufficient support in evidence and try not to make claims beyond what the evidence seems capable of supporting, at least in a statistical sense.

Christians also have to face the sad difficulty that not everyone who is prayed for is healed. I have had two brothers die “before their time” from cancer, despite the fact that I prayed diligently for their healing.

I think there is sufficient evidence to show that divine healing is a plausible possibility, not to be dismissed lightly. The evidence is there for those who wish to investigate the truth further.

Whoever reads this, I hope you are one such person.

And if anyone comes across studies I haven’t found yet, I am always interested. Thanks.

« DNA, evolution and challenges for all
Time for a change »