This is the story of a modern healing miracle, a remarkable recovery after prayer.

Dr Sean George suffers a heart attack and is treated by two doctors and several nurses. His heart effectively stops for an hour and a half. After thousands of chest compressions and 13 shocks from a defibrillator, his heart ECG is ‘flatlining’, and eventually they stop the treatment.

At that point his wife arrives and is advised to say her goodbyes. But she holds his hand, prays a simple prayer, and immediately life signs return. He subsequently fully recovers, even though all medical prognosis indicates his brain will have suffered irrepairable damage. The doctor retained copies of the medical documentation. Is it a miracle?

Copies of medical documentation were obtained from Dr George and are reproduced with his position. 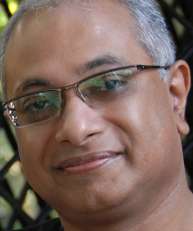 Dr Sean George is Consultant Physician and Head of Department of General Medicine at Kalgoorlie Hospital, in Western Australia. He also holds a Clinical Associate Professorship with the University of Western Australia.

At the time of the events recounted here, he was 39.

On 24 October 2008, Sean was returning with his intern from a visit to a specialist clinic in Esperance, 400 km south of Kagoorlie. He had reached the small town of Kambalda (population about 2,700), about 60 km from Kalgoorlie, when he felt chest pain.

He decided he should visit the town clinic run by the local GP (General Practitioner). He had an ECG, saw the results, and realised he was having a heart attack. Eight minutes after the ECG, he went into cardiac arrest.

For the first 48 minutes, his heart was in the condition known as ventricular fibrillation, where the cardiac muscle quivers but doesn’t pump effectively. (Thus the ECG shows some activity, but it is readily diagnosed as VF.)

Therefore the local GP and the intern used a defribillator to try to restore the normal rhythm.

After 13 shocks over 46 minutes, his heart fully stopped – a condition known as asystole, where the ECG is ‘flatlining’ and defibrillation is no longer useful.

The doctors and nurses undertook manual heart compressions, several thousand in all over the one and a half hours. But after another 37 minutes in which he made no response, they concluded that further CPR was useless. Sean explains:

When the blood supply is interrupted to the brain for 3 minutes the cells begin to die, after 20 minutes the organ is completely dead – this is why CPR is rarely performed for more than 20 minutes. Had I been performing CPR on another person in the same circumstances I would have stopped life support as well.

Sean had been without effective heart operation for almost an hour and a half, and there was virtually no medical hope. Wikipedia says of asystole: Out-of-hospital survival rates (even with emergency intervention) are less than 2 percent.

About this time, Sean’s wife Sherry arrived from Kalgoorlie, only to be told by the doctors that Sean was dead, and she should go into the resuscitation room and say goodbye.She went into the room and took his cold hand, and prayed:

Sean immediately began to breathe again and a weak heartbeat returned, although he remained unconscious. The GP thought this was worst thing that could have happened because he knew Sean would be brain dead, and so at some stage in the future his wife would have to switch off the ventilator.

Sean was transferred to Kalgoorlie Hospital and later by air ambulance to Perth. There an angiogram showed a blockage in the right coronary artery. The doctors put in a stent, but he wasn’t expected to live for more than a day, and certainly not without severe brain damage. His kidney and liver had failed and his heart still required a pump.

But Sean didn’t die. He continued to hang on to life, though unconscious and supported by drugs and medical equipment, as the photo at the top of this post shows.

Two days later a friend (a doctor) came to visit and said to him Sean if you can hear me squeeze my hand. And he squeezed her hand. So she said Sean, open your eyes and he did.

The next day he had started to move his hands and two more days and he was awake and able to breathe on his own. He woke up and said “what am I doing here?” He was found to have no brain damage at all which is medically an impossibility. He required dialysis for his kidneys.

Less than two weeks after the heart attack, Sean was released from hospital and three months later he returned to full operational duties at Kalgoorlie Hospital.

In the end, the only medical problems he suffered from were severe chest pains from the thousands of compressions and burn marks on his chect from the deibrillator.

Was it a miracle?

No-one can ever prove that a miracle has occurred, but we can say quite certainly that Sean’s recovery was extremely unusual. And that this extremely unlikely recovery began immediately after his wife asked God to act.

Sean is in no doubt:

There aren’t many well documented cases of patients being clinically dead for so long, returning to life with their memory perfectly intact and without any neurological problems at all. Medically this is impossible; it could only be done by God. …. I believe I am only alive because God has done an amazing miracle.

Check out Wikipedia on Ventricular Fibrillation and Asystole.