Climate change science predicts that the earth will heat up over the next century. So far the predictions are correct, with record temperatures being experienced over the past two years and the past 20 years.

It isn’t easy to calculate average global temperature. Which measurements should be included, and how much should each be weighted? Do we want air temperature, or water temperature?

Different calculations therefore do not always agree totally. But the picture is quite clear. 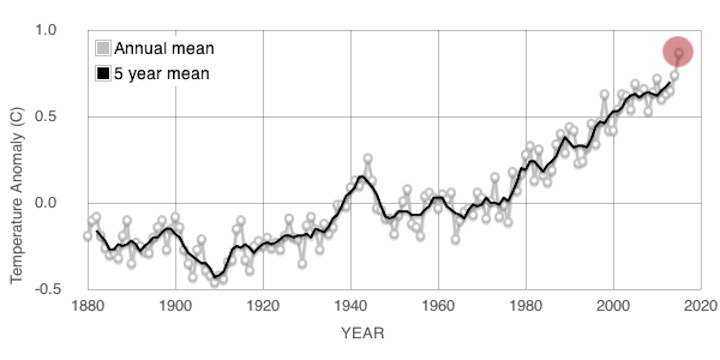 The graph shows that:

Climate scientists have used tree rings and ice cores to estimate global temperatures for the past 2000 years (Wikipedia), and have found that the temperature has virtually never been above the 1951-1980 average over that time. What we are experiencing is hotter temperatures than have been known for at least two millennia, and probably far longer.

Not so long ago, some people were claiming that temperatures were no longer rising, and the hottest year on record was a decade ago (in 1998). This was not correct, as 2005 was hotter than 1998. It was true that the period 2002-2012 saw very little increase in temperature, but this was a flat section of an otherwise rising curve, and didn’t change the long term trend. The “flat spot” in temperatures between 1940 and 1975 was far longer than this recent period, but did not indicate any change in the long term trend.

Another claim was that the slower rate of rise in temperature over the period 1998-2012 indicated that warming was slowing down, and the scientific predictions were wrong. However this claim misrepresented the evidence. Climate change science predicts both a long term rise in temperature with hotter and colder periods leading to variations about this trend. These variations occur for reasons that are broadly understood, especially the El Nino and La Nina weather patterns. The temperature graph shows evidence of all this.

Facts – the antidote to misleading claims

These are the facts on worldwide average temperatures (from Wikipedia):

It cannot be doubted

The world is warming, at an unprecedented rate, and is hotter than it has been for a long time. This cannot be doubted by anyone who looks at the evidence.