The universe is our vast, complex and mysterious home. But how did it start?

Scientists have a pretty good idea of how it grew from the initial big bang about 14 billion years ago to the stars, galaxies and nebulae we see today, and the billions more that exist beyond our sight.

But how it started and what caused it remains a mystery.

Read the history of the universe in just a few paragraphs. Then take some time to consider the different answers to the question of how it started.

Fifty years ago, many scientists thought it possible that the universe had always existed. The two main theories were:

But most scientists no longer believe these theories. It is generally considered “proven” that the universe we inhabit began about 14 billion years ago with the “big bang”. However many aspects are still being worked out, and here I outline the most accepted understanding at present (see note 1, below).

In the big bang, all the matter, energy, space and time which we can observe were apparently created in an instant. Initially concentrated in a very small point, the universe expanded outwards rapidly with enormous energy. This was not like an explosion into empty space, but expansion of space itself.

In the first second …

In the first fractions of a second, when current laws of physics did not apply, a lot happened.

By the time the universe was 1 second old, it had expanded to a size about a thousand times the size of our solar system, and the temperature dropped to about ten thousand million degrees. 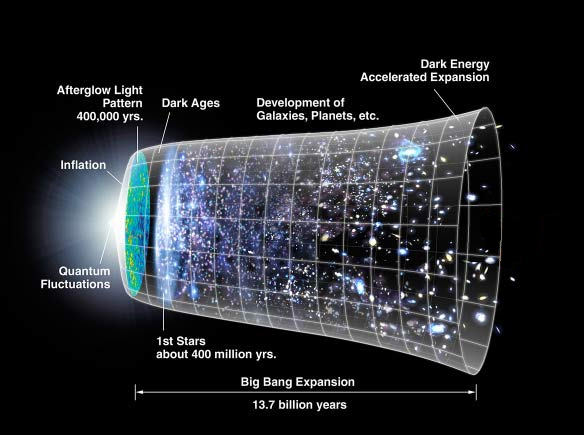 Diagram by NASA, via SNAP

As the age of the universe moved beyond seconds to minutes, it grew in size to about 1015 kilometres across. Nuclear fusion formed the first of the nuclei we know about today – Hydrogen and Helium – in proportions that proved necessary for the universe as we know it to form. The universe was still incredibly hot.

After several hundred thousand years, conditions had stabilised enough for the first atoms to form. After several hundred million years, the first stars, and later the first galaxies, began to form by gravitational attraction. Supernova stars created many of the heavier elements out of the lighter elements, and then exploded them out into space. This made them available for planets which later formed, thus allowing the complexity of chemistry on earth necessary for life.

The universe is still expanding today, and scientists are able to:

Thus it has been demonstrated that the big bang origin is almost certain.

What caused the big bang?

Logically, there are three possibilities for the cause of the big bang:

Option 1 seems to be the most obvious choice. For most people, this implies a god of some sort, but some believe our universe could have resulted from a previous universe.

This may be true, but we still have to find an explanation for the entire chain of universes.

Option 2 seems to go against common sense. Nevertheless it is accepted by many people, especially scientists who avoid “supernatural” explanations. In recent times, cosmologists like Lawrence Krauss have argued that a flat zero-energy universe and quantum physics show that it is not only possible, but quite likely. Thus a universe could come into existence from nothing. However other cosmologists and philosophers criticise Krauss for calling a quantum field (which is required, and is full of potential) “nothing”, when it is clearly something. (I will be enlarging on this point shortly.)

Option 3 was once a popular choice. After all, something that has always existed doesn’t need a cause. However the demise of the steady state theory of the universe and the evidence for the big bang virtually rule this out for our universe.

It is possible combine options 1 & 3. That is, there may have been an infinite series of universes, leading eventually to our present universe. But this idea still doesn’t explain why these universes exist. Also, we know scientifically that physical processes gradually “run down” according to the Second Law of Thermodynamics, and in infinite time, all phit seems that matter and physical process could not be infinite.

Does God’s existence explain anything?

This conclusion has been an option for millennia, but it has its critics.

Some people argue that if God can exist without an explanation, then why can’t the universe? God’s existence then wouldn’t explain anything.

But if God exists and is timeless, whereas the universe clearly isn’t, then his existence may explain everything better, even if it doesn’t provide a scientific explanation.

For a more detailed discussion of the arguments around whether God is the best explanation of the universe, see The Cosmological argument.

Which is more reasonable?

So we have three main options. Either:

All three may seem unlikely, but the universe is here, so one of them must be true.

Each view has its supporters, but none can be proven or disproven. Each of us can decide. I believe that creation by God is more reasonable than either of the other options – what do you think?

Scientists cannot observe the big bang, so they have to rely on mathematical models to understand what probably happened. These models cannot tell us whether the universe is finite (in which case the whole universe began in that one very small point) or infinite (in which case only the part we can see was concentrated in that point). But if there was and is more than we can observe, we cannot know. The models can only be extrapolated back so far, and then they reach what is known in mathematics as a “singularity”, where the size of the universe is infinitely small and the density infinitely large, and the maths can go no further.

Read more on this topic:

References on the science

References on the arguments for God