Not so very long ago, many internet critics of christianity were pointing out that there was no archaeological evidence of settlements at Bethlehem and Nazareth in the first century. This demonstrates, they said, that these towns didn’t exist, and that therefore the Bible accounts are not historical.

But the situation is now very different. A number of new archaeological discoveries at Nazareth, and one artefact that mentions Bethlehem, provide new evidence.

Nazareth is said to be the boyhood home of Jesus, but the archaeological evidence was scant and there were no contemporary references to it – the first Jewish reference dates to the 3rd or 4th centuries. So some have claimed that it too did not exist as a village in Jesus’ time, and some sceptics have devoted books and websites to promoting this conclusion.

Much of the area where Nazareth would have stood is now covered by the modern city, and so excavation is extremely limited. Nevertheless, in the last few decades, excavations have uncovered a number of finds that have slowly increased the available evidence. 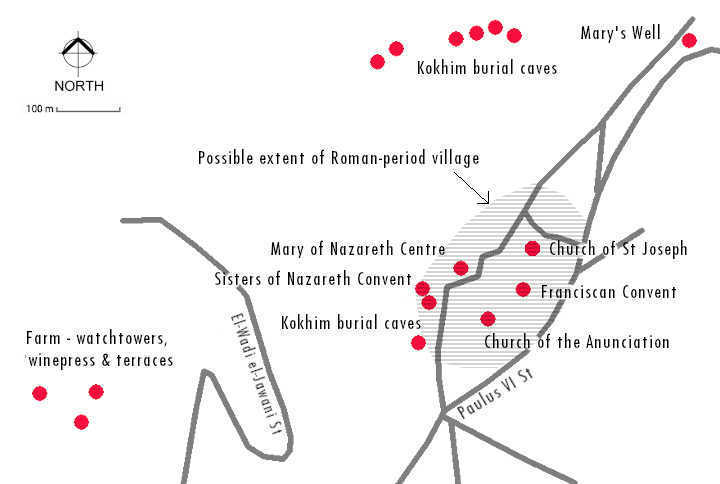 In the 1950s and 60s, B Bagatti found evidence of “many rock-cut elements, including silos, cisterns, interconnecting corridors, grottos, basins, winepresses, cellar stores, and small rock-cuttings” (Alexandre) in the vicinity of the Franciscan buildings (Church of St Joseph, Franciscan Convent and Church of the Anunciation) and dated to the first century. Later work by Yardenna Alexandre (see below) found similar pits nearby below a Roman-period house, suggesting that houses had probably also been located in the Franciscan sites in the first century .

In 1962, a syagogue inscription in Caesarea mentioning Nazareth was dated to about 300 CE. Historian Paul Maier has claimed a first century date for this fragment, but I can find no support for this claim and assume it must be an error.

A number of kokhim tombs and graves dated to the first century have been found in the vicinity of Nazareth (see e.g. the reference to archaeology by B. Bagatti, N. Feig & Z. Yavor in Wikipedia). Kokhim are rock-cut tombs in which narrow shafts radiate out from a central chamber.

In 1996, an ancient winepress associated with agricultural terraces was discovered about 500 m from the site of ancient Nazareth. The archaeological investigation continued for several years at what is known as the Nazareth Village Farm site on what was once a farm on a hill just outside the ancient village.

Excavations and analyses by Stephan Pfann, Ross Voss and Yehudah Rapuano over the period 1997-2007 found several structures (a winepress, several watchtowers, stone irrigation channels and agricultural terraces). Coins and pottery found at the site confirm that there was an agrarian community at Nazareth in the first century and suggests that the residents of this village made a living growing grapes, olives, and grain on terraces cut into the limestone hills. The report states:

In December 2009, an Israel Antiquities Authority press release announced that a house in Nazareth had been excavated and found to contain artefacts from the “early Roman period” (first and second centuries). The archaeologists also found a pit hewn out of stone with a concealed entrance, which they believe was constructed as protection during the Jewish revolt of 66 CE.

In 2020 Archaeologist Yardenna Alexandre published a paper summarising these excavations. Pottery from this site indicated it was inhabited in the late Hellenistic to the Early Roman period (late second century BCE–early second century CE). 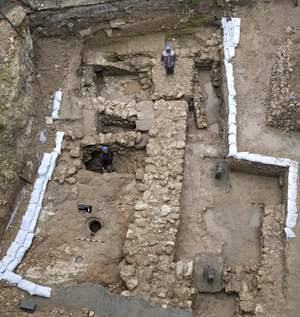 At that time a 5 room house plus courtyard (pictured in the photo) was located on the site of a previous Iron Age building (tenth to early 8th centuries BCE) and using one wall of that building. The house was partially cut into bedrock and partially constructed of stone and probably timber above. The excavation also uncovered three underground rock-hewn pits, one above the other, which may have been used as cisterns, silos and underground hideouts.

In 2012 Yardenna Alexandre also reported on excavations at Mary’s Well, where stone walls, coins and pottery sherds all indicated settlement in the late Hellenistic period (around 100 BCE). These artefacts were similar to those found in the courtyard house.

In 2012, archaeologist Ken Dark, Associate Professor at Reading University, announced he had found remains of “an exceptionally well-preserved domestic building, probably a ‘courtyard house'” dating from about the middle of the first century. The house later went out of use, and several tombs were constructed on the site, probably late in the first century.

In 2020 Ken Dark published his book Roman-Period and Byzantine Nazareth and its Hinterland. In this book and subsequent interviews, Dr Dark confirmed many details previously released:

In the fourth century, christian pilgrims believed this house was the boyhood home of Jesus, a possibility Dr Dark admits, but says cannot be proven. If it wasn’t, Jesus probably lived in a similar house.

Dr Dark concludes that Nazareth in Jesus’ day may have been larger than previously thought, perhaps up to 1000 inhabitants.

Against all this evidence from many different competent archaeologists, a few sceptics (principally Rene Salm) argue that the experts have got it wrong, perhaps for conspiratorial reasons. Mr Salm is not an archaeologist, but has published two books and maintains a website.

His earlier book The Myth of Nazareth: The Invented Town of Jesus (2008) reinterprets the archaeological evidence and argues that Nazareth wasn’t occupied at the time of Jesus. But the work of Yardenna Alexandre and Ken Dark wasn’t available then, so Mr Salm has had to contend with significant further evidence and argue against recognised experts in archaeology, coins and pottery. His second book, NazarethGate: Quack Archaeology, Holy Hoaxes and the Invented Town of Jesus (2015) alleges “scientific incompetence, wishful thinking, and distortion of the facts–probably for economic reasons”.

The conclusions of the archaeologists

These last two discoveries are seen by the Israel Antiquities Authority and others (the Biblical Archaeological Review, the Independent, the Jerusalem Post, blogger Tim O’Neill, and New Testament scholar Larry Hurtado) as conclusive evidence that Nazareth did indeed exist at the time of Jesus. Estimates of the population at the time of Jesus vary from about 400 to 1000.

New Testament scholar Bart Ehrman has written briefly about Nazareth in his book Did Jesus Exist? and on his blog. He has personally contacted archaeologist Yardenna Alexandre to verify that artefacts (principally coins and pottery found in several separate excavations) did indeed come from around the time of Jesus. Based on this evidence, and the reports referred to above, Ehrman concludes: “René Salm’s claim that Nazareth did not exist in the days of Jesus is dead wrong and is rejected by every recognized authority – whether archaeologist, textual scholar, or historian; whether Jewish, Christian, agnostic, or other.”

In the Bible, Bethlehem, near Jerusalem, is said to be the location of Jesus’ birth. However historians doubt the historicity of the gospel birth stories and archaeologists have found little that could identify the town of Bethlehem in the first century. This has led some to the conclusion that Bethlehem didn’t exist as a village in Jesus’ time. Some say that Jesus was actually born in Bethlehem in Galilee, not far from Nazareth.

What should we expect?

The exact location and size of the Judean Bethlehem at that time is unclear, and some early traditions say that Jesus was born “near” Bethlehem, which may indicate a region rather than a town. So it may not be likely that much archaeological evidence would be found.

A small but useful discovery 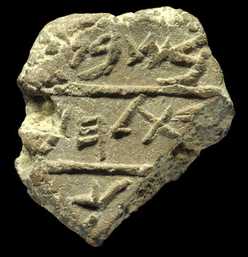 In May 2012 the Israel Antiquities Authority announced that archaeologists working in the city of David area of Jerusalem had discovered a small (1.5 cm) ‘bulla’ (see photo), a piece of clay used to make an impression in wax, sealing a document so it couldn’t be altered. This small bulla apparently accompanied a delivery of goods to the king of Judah about 7 centuries BCE, and identifies that the shipment was despatched from Bethlehem.

Did Bethlehem exist at the time of Jesus?

Archaeologist Ken Dark provides some additional support for the existence of Bethlehem in the first century. A cave in Bethlehem was mentioned in documents and venerated as early as the second century as the location of Jesus’ birth, and the Emperor Hadrian is reported as building a shrine over the spot in the early second century to suppress christian belief. Whatever the truth of all this, it does lend support to the idea that the Bethlehem location was well known in the centuries after Jesus.

It seems there is now less reason to doubt

The evidence for Nazareth existing throughout Jesus’ lifetime is now overwhelming. It was probably established a century earlier as a small hamlet, and slowly grew larger through the first century.

The evidence suggests that a settlement existed at Bethlehem long before the birth of Jesus, and long afterwards, so it is reasonable, though not certain, that Bethlehem existed at the time of Jesus. Whether he was actually born there is a different question.