The Old Testament of the Bible records the Israelite nation fleeing Egypt in the Late Bronze Age (somewhere between 1500 and 1200 BCE) and conquering dozens of cities in Canaan (more or less present day Israel) and killing all their inhabitants – all at the command of their God, Yahweh. Critics of the Bible point to these events as a serious reason not to take the Bible, or the christian God, seriously.

But did it happen this way? Did God really command such atrocities? I have examined the historical evidence in some detail, and come to the following conclusions:

Read on to see the evidence that led me to these conclusions.

The Old Testament of the Bible (Joshua 1-12) records Joshua leading the Israelites in conquering Canaan in a quick military campaign, destroying cities, killing the inhabitants and taking over the land. In several passages (Deuteronomy 7:1-5, 20:16-18) God is said to have commanded the wholesale slaughter of the inhabitants, because of their wickedness (e.g. Deuteronomy 9:5, 18:9-12).

How should we understanding these disturbing commands, which appear to amount to genocide? Evangelical christians justify the behaviour of God (Ref 10) but is this fair to God’s character and to history?

Before we form a moral or theological opinion on something like this, we need to consider the historical facts as far as they can be known. For this, we will put the Biblical account partly to one side temporarily, and see what archaeology and history can tell us about these events. Fortunately, for the conquest of Canaan we have significant archaeological evidence in the ruins of Canaanite cities, and we also have some independent texts and inscriptions (Ref 1).

There is a wide range of views on this matter, from minimalists who deny almost all historical basis for the conquest, to maximalists who believe the Biblical record is substantially historical (if understood correctly). I have followed scholars with a moderate or middle view. These scholars generally believe that the Biblical stories of exodus and conquest contain historical memories, but they sometimes conflate different events, and also include legendary material.

The Exodus from Egypt

There is reasonable evidence that some of the people who formed the nation of Israel came to Canaan from Egypt (Ref 3).

Historical evidence for (and against) the conquest

Scholars are uncertain when the Joshua conquest could have taken place. The date favoured by some Biblical scholars is about 1450 BCE, but archaeologists and historians prefer a date closer to 1250 BCE (Refs 1, 2). Perhaps there were several migrations and the Joshua accounts are conflated. But whatever is the case, the Joshua account, read literally, is not well supported by the evidence.

Archaeology suggests that the population of Canaan fluctuated considerably in the Bronze Age. Most estimates are in the range of 50,000 (perhaps before the Israelite settlement) to 150,000 (Refs 1 & 2). One estimate is around 600,000 (Ref 13), but few accept such a high figure. Whatever is the best estimate, we can say almost certainly that 2 million people never settled in the land at this time, and Joshua is exaggerated and inaccurate at this point. 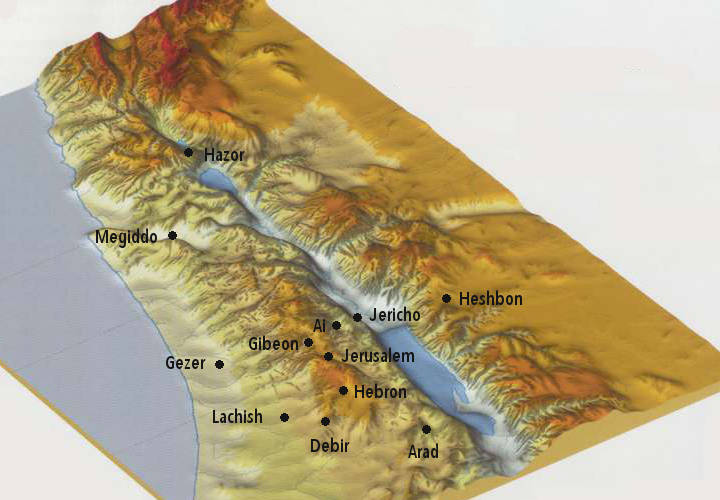 Archaeology and the destruction of cities

This was a time of turmoil. Egypt had controlled Canaan but when Egyptian influence waned, it left a power vacuum and many different cities and tribes fought for power and land. Many cities and villages were destroyed at this time, although probably over a longer period than envisaged in Joshua, and possibly by armies other than Joshua’s. So there is some evidence supporting the Joshua campaign.

However many cities said to be destroyed by Joshua were either destroyed centuries before (Ai almost a millennium earlier and Jericho in about 1550 BCE), or apparently didn’t even exist at that time (e.g. Gibeon, Arad, Heshbon), or remained unconquered until much later (e.g. Jerusalem, Megiddo). This evidence tells agains the historicity of the campaign as described in Joshua.

Some conservative scholars (e.g. Ref 15) argue that the archaeology supports a literal understanding of Joshua if the conquest occurred 2 centuries earlier, but few scholars accept this, and the arguments are not convincing to my limited understanding.

However other conservative scholars (Ref 5) accept that an Israelite entry into Canaan was not as destructive and rapid as apparently portrayed in Joshua, but “involved several processes rather than a singular event.” It is widely accepted that Joshua is hyperbolic, in that several of the locations identified as cities were at most small settlements, and the destruction was not as complete as portrayed. Some (Ref 14) argue that several passages in Joshua shouldn’t be understood as implying a rapid and complete conquest.

We can say almost certainly that while significant fighting occurred, often consistent with Joshua, the conquest described in Joshua didn’t happen literally as apparently recorded there (Ref 1).

Nevertheless an inscription (the Merneptah stele) provides good evidence that a nation known as Israel was in existence at the end of this tumultuous period (Ref 4).

Artefacts found in the remains of cities (e.g. pottery and religious figures) and a few texts (some on stone) show evidence of both gradual and destructive change, from Egyptian occupation and Canaanite culture to a mixed Israelite, Canaanite and sometimes Philistine culture. It appears that many Canaanites remained in their cities or were displaced to nearby rural areas, and newcomers were gradually assimilated over time.

DNA evidence suggests that modern day Palestinians and Lebanese are descended (in part) from Canaanites, as are modern day Jews. The Canaanites were definitely not all wiped out.

The conventional Protestant understanding (e.g. Ref 10) is that the Biblical text is accurate and portrays real events commanded by God. The extreme action to exterminate all the Canaanites was justified because they were abominably evil, with practices such as child sacrifice, ritual prostitution, etc,and that evil would contaminate God’s chosen people.

But there are significant problems with this explanation.

As we have seen, the history and archaeology suggest that the Joshua stories are not all literal history, but at the least exaggerated. The claims of total conquest reflect the situation several centuries later when the whole land was Isaraelite.

The Bible doesn’t speak with one voice.

The Bible seems to have two stories, the complete conquest story and the historically more realistic story of slow conquest and assimilation.

Experts agree that the accounts, and likely the commands too, were written in hyperbolic language as was common at the time, and would never have been understood at the time as literal commands and accounts.

Were the Canaanites so evil?

There is no evidence that the Canaanites were any worse than other nations at the time. Child sacrifice and ritual prostitution were not uncommon (even the Bible contains the story of Abraham almost sacrificing his son Isaac).

It therefore seems best to consider the Biblical text as not fully historical (at least) and probably highly legendary. There is no in principle reason why God couldn’t reveal himself through legendary material.

It seems likely that a group from Egypt entered Canaan around 1250 BCE and over a period of a century or more gained a place for themselves by both fighting and assimilating (as described in Judges). The resulting mix of the original Canaanites, the immigrants from Egypt and other newcomers fleeing fighting on the coastal plains, coalesced into the nation of Israel in the hill country of Canaan.

The group from Egypt perhaps brought new religious ideas which competed with the Canaanite paganism and eventually became Jewish monotheism. It is quite possible that God used such means to reveal himself.

The Joshua stories seem to be based on facts, but much exaggerated, idealised and “talked up”, as was common at the time, to justify Jewish claims to the land.

Christians use various arguments to try to justify God’s supposed actions, but they are all unconvincing (to me), and several arguments undermine the idea that a good God could command genocide.

The UN defines genocide as “the deliberate killing of a large group of people, especially those of a particular nation or ethnic group.” If it happened or was commanded, it was genocide.

2. “The Canaanites were abominably evil and had been given many opportunities to repent. They deserved their just punishment.”

Most scholars accept they were not particularly worse than other nations who had similar practices, and who were never punished like this. It wasn’t just to punish those among the Canaanites who were too young or powerless to be considered responsible.

3. “It wasn’t so bad because the children were innocent and went straight to heaven.”

We don’t know whether the children went straight to heaven. Those who believe in the doctrine of Original Sin believe they were not innocent and thus without Jesus they went to hell.

But if the argument was true, why wouldn’t we kill all our children today (as one poor woman did) because that would ensure the greater good of their eternal future? No-one would suggest that this action would be justified today, so how could it have been back then?

4. Would you kill children today if you believed God had commanded you to?

I hope no christian ever would do so (though there are cases, e.g. the Rwanda genocide, when christians did do this). But if all the Bible is true, why would it be possible for God to command killing then but not now? If someone thought God had called them to kill today, we would (rightly) regard that person as having a mental illness.

So, could God have commanded these killings?

This is not a question that historical study can answer. But in the light of all that I have examined, there are four reasons why I think God did not command genocide, or even killing.

Graphic: Free Bible Images. This graphic shows the inhabitants of the city of Ai chasing the Israelites after an unsuccessful attack. There is some doubt about whether Ai actually existed at the time of Joshua, and the graphic may be anachronistic, as it appears to show the Canaanite soldiers wearing iron helmets, whereas this was still the Bronze Age, and neither the Canaanites nor the Israelites had iron weapons at this time.
Map from Free Bible Land Maps.