Psychologists have studied people who have had “peak”, “mystical” or “religious” experiences and found that the effects in their lives are almost always positive. These experiences, strange as they may seem to the rest of us, do not seem to have been the result of mental illness, drugs, epilepsy or any other “abnormality”.

So are they really in touch with God? Or are these experiences just a product of our minds? Read a few accounts, check out the evidence, and decide for yourself.

You can jump straight to these sections if you want:

Over the centuries, a number of “saints” have been considered mystics – that is, they lived lives devoted to God, sought a deep union with God, and experienced God in some direct way. Often these experiences gave them new understandings of life and God.

For some people, mysticism refers to some form of “new age” cosmic consciousness, or similar, perhaps supposedly based on ancient secret wisdom from Egypt or elsewhere.

Many “ordinary” people report some mystical or “peak” experience at some time in their life, often without seeking it, and without ever being considered as mystics. Sometimes these experiences have deep effects on those who receive them, but other times the experience is not as deep, and may simply be called a “religious experience”.

On this page I look at what people experience, how such experiences affect people, how they have been investigated scientifically, and what we may conclude about them. I focus more on the western world, aware that eastern religions have a different perspective, which is sometimes covered in the sources I have used. I generally use the term “mystical” but some of the researchers use “peak” or “religious” – these generally refer to similar experiences though perhaps with different levels of intensity. There are references at the end.

Almost too much for them to bear

The best way to describe the sorts of experiences I am investigating here is to recount a few of them.

“There was no sensible vision, but the room was filled by a Presence, which in a strange way was both about me and within me. I was overwhelmingly possessed by Someone who was not myself, and yet I felt I was more myself than I had ever been before.”

From the Religious Experience Research Unit at Oxford University, in A sense of presence by Timothy Beardsworth.

Feeling at One with Everything

“I remember at that time I was really into meditation and I remember sitting downstairs meditating and what I can describe as “waves of Bliss” coming over me. They were really intense and felt like it was coming from outside of me and I remember a voice, repeating “All is One”, “All is One” being repeated over and over again. I remember feeling a sense of oneness with everything and things seemed clear, and absolutely beautiful. I think it lasted all day or several days, I’m not really sure but it seemed like time has stopped. It was a very meaningful experience, very liberating and beautiful, I felt inspired, strong, full of life and in awe and I miss it.”

From the Mystical Experience Registry

“I stepped out alone, walked into the streets of Lone Pine, Calif., and saw the world — the mountains, the sky, the low scattered buildings — suddenly flame into life. There were no visions, no prophetic voices or visits by totemic animals, just this blazing everywhere. Something poured into me and I poured out into it. This was not the passive beatific merger with “the All,” as promised by the Eastern mystics. It was a furious encounter with a living substance that was coming at me through all things at once, too vast and violent to hold on to, too heartbreakingly beautiful to let go of. It seemed to me that whether you start as a twig or a gorgeous tapestry, you will be recruited into the flame and made indistinguishable from the rest of the blaze. I felt ecstatic and somehow completed, but also shattered.”

The presense of God

“…. all at once I felt the presense of God – I tell of the thing just as I was conscious of it – as if his goodness and his power were penetrating me altogether …. I thanked God that in the course of my life he had taught me to know him, that he sustained my life and took pity both on the insignificant creature and on the sinner that I was. I begged him ardently that my life might be consecrated to the doing of his will. I felt his reply, which was that I should do his will from day to day, in humility and poverty, leaving him the Almighty God, to judge of whether I should some time be called to bear witness more conspicuously. Then, slowly, the ecstasy left my heart; that is, I felt that God had withdrawn the communion, which he had granted.”

From Varieties of Religious Experience by William James, quoted in The Trace of God by Joseph Hinman.

It is evident from these examples that mystical experiences may involve God, or may be more general, and may even occur with those who don’t believe in God.

The scientific study of mystical experiences

Scientific study of these experiences is based on several different approaches:

These studies have found that somewhere between 5% and 60% of people report some sort of transcendent experience (depending on how “deeply” the experience is defined), so they are not as rare as we may expect. In addition, a number of features tend to be associated with mystical and religious experiences:

Studies show that mystical experiences, like religious belief generally (see Faith and wellbeing), mostly produce positive results in people’s lives. The following have been documented by many studies – Hinman has seen over 200 papers on this subject.

Famed psychologist Abraham Maslow developed his hierarchy of human needs, which said that humans tried to fulfil the following needs, in order from basic to “highest”: psysiological (food, air, sleep, etc), safety, love & belonging, esteem and self actualisation, which he defined as meeting one’s full potential.

Studies show that people who have mystical experiences are more likely to feel self actualised and be psychologically healthy, and have a greater sense of meaning and purpose in life.

Studies show that those who have mystical experiences have better mental health than average, in a number of ways.

I can find little research on the physical health effects of mystical experiences.

Explanations based on atypical human behaviour

It seems clear, then, that none of these “abormal” aspects of human psychology can explain the majority of mystical experiences. Newberg and D’Aquili write:

… we do not believe that genuine mystical experiences can be explained away as the results of epileptic hallucinations or …. triggered by drugs, illness, physical exhaustion, emotional stress or sensory deprivation. … Instead, they may be produced by sound, healthy minds …

The main arguments for this conclusion are that: 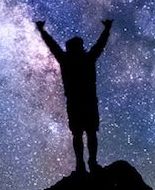 There are three obvious answers:

Mystical experience and our brains

If mystical experiences have an evolutionary origin, then they must have been associated with something that increased the likelihood of survival of the individual. Since religious belief and mystical experiences have been shown to provide many health benefits which reduce mortality, it seems likely that our brains evolved in ways which allow them.

The interesting thing is that religion performs the same functions, and so assists the brain, and thus promotes survival. For example religious belief tends to exercise control over destructive behaviours, while also helping us feel in control in an uncertain and terrifying world. So, Newberg says, belief in God seems to be “built-in” to our brains’ functioning.

This accords with the findings of many cognitive scientists, that a propensity towards religious belief, especially belief in a creator, is innate.

Newberg believes his research shows that religious belief is the natural disposition of a healthy brain, although our choices about belief (whether atheism or theism) modify our brains so the brains of atheists and believers become wired differently.

Does this rule out God actually existing?

Some say that neuroscience shows that God isn’t necessary to explain religious belief. But other researchers point out that if God exists, he would be known and we would think about him using our brains in exactly the same way as would be the case if belief was caused only by our brains. Andrew Newberg:

So are there any reasons to believe that God is the ultimate source of mystical experiences?

No-one I have read suggests mystical experience provides proof that God exists, except maybe to the one experiencing God in that way. So how should we examine this question? Hinman suggests the following approach.

Mystical experiences are very personal and are not amenable to scientific analysis – for example, they cannot be produced on demand the same way religious practices like prayer and meditation can. In any case, even if science could analyse the experience, the existence of God as a cause is beyond direct empirical testing.

He suggests we are prima facie or initially justified in accepting things are the way they appear if (1) it does appear that they are that way, and (2) there is no reason to think that something has gone wrong.

We can set criteria to test these two requirements, for example:

The argument from mystical experiences to God

On this basis, it can be argued that mystical experiences provide a good reason to believe that God exists. The argument goes like this ….

Thus mystical experiences appear to provide prima facie justification to infer that they genuinely can put people in contact with the divine.

The most obvious objection to the reality of mystical experiences is that they occur among all religions, and sometimes even atheists. This would be an objection against identifying the divine source of the experiences with one particular religious tradition, but mystics seldom make dogmatic statements about the being they believe they have experienced (mystical experiences are often regarded as ineffable). Provided only general claims about God are made, it seems to me that this objection is not strong.

If mystical experiences are ineffable, how can we make judgments about their content?

The main arguments for the validity of these experiences are the measurable results in the subsequent lives of the recipients. And while experiencers find themselves unable to express the depths of their experience, they are able to describe the main details, which is enough for the purposes of the argument here.

Preference for a natural explanation

Some people have a preference for a natural explanation, some are happy to accept a more transcendent one. I am happy to leave it at that.

In summary, mystical experiences have been shown to be positive, life-affirming, healing, and consistent with the idea of a loving God, and less consistent with other assumptions. It is therefore reasonable to conclude that they provide useful evidence for the existence of God. Whether that evidence is enough to convince, either on its own, or cumulatively when considered with other evidence, is for each of us to decide.